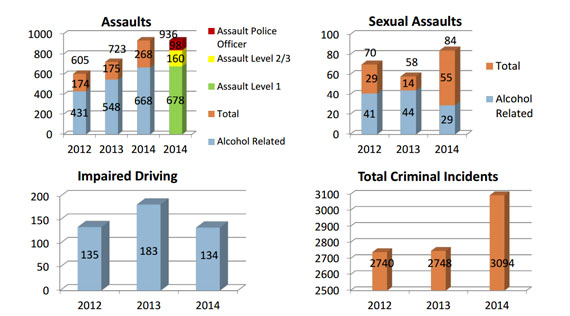 Crime trends reported in Nunavik from the first three months of 2012 to 2014. (IMAGE COURTESY OF THE KRG)

Violent crime continues to rise in Nunavik, with police reporting a spike in assaults this year compared to 2013 and 2012.

The Kativik Regional Police Force says that assaults reported throughout Nunavik are up by a third so far this year, compared to 2013.

In a report tabled at this week’s meeting of the Kativik Regional Government council in Ivujivik, statistics from January 2014 to April 2014 show assaults have increased by 29 per cent from the same period in 2013, with a total of 936 assaults reported to police.

Of that number, roughly three-quarters were fueled by alcohol. Ninety-eight assaults have been directed towards police officers so far this year.

At the end of last year, the KPRF expressed concern about the intensity of violence police dealt with in 2013.

Those included three stand-offs with police; one that resulted in the shooting death of KRPF officer Steve Déry.

At the time, KRPF police chief Aileen MacKinnon said many of assaults appeared to be linked to alcohol and drugs, apart from in Kuujjuaq, where certain alcohol-related crimes have dropped since 2013.

Sexual assaults in Nunavik are up a staggering 44 per cent from this time in 2013; there have been 84 reported in the first three months of 2014 compared with 58 in the beginning of 2013.

And calls involving firearms have more than doubled this year. Twelve were reported in the first three months of 2013, while 26 have been reported between January 2014 and March 2014.

The KRPF is also struggling to maintain staff to deal with the bump in violence.

Although MacKinnon said the force continues to maintain its required staffing numbers in each community, a number of officers have been hired by Quebec’s provincial police, the Sûreté du Québec, and other southern forces so far this year.

“[That’s caused] staffing issues as the officer often need to leave within a short period of time,” the KRPF report said. “Hiring of replacements has been a priority in order not to leave the communities with a reduced staff.”

Despite staffing challenges, Nunavik police managed to seize $157,000 in illegal drugs and alcohol — with a northern value of $560,000 — throughout the region in the first three months of 2014.