Nunavut has the highest level of bone-softening disorder in Canada 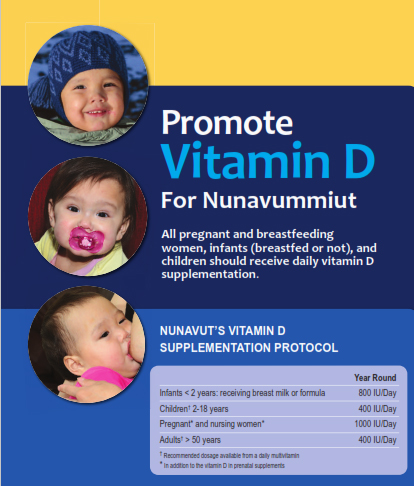 Despite clear recommendations on how to prevent rickets, Nunavut and Canada’s other territories continue to see cases of severely vitamin D-deficient children across the North, says an Ottawa researcher.

“There has been a failure to eradicate the disorder in Canada’s North,” said Dr. Leanne Ward, director of pediatric bone health at the Children’s Hospital of Eastern Ontario.

“We have clear, publicized and appropriate guidelines, but still we are seeing cases — that’s the problem,” Ward said in an email to Nunatsiaq News.

Rickets is caused by lack of vitamin D and lack of calcium. Children in the North are considered at risk because of maternal diets low in both, in addition to low exposure to sunlight.

Through symptoms like seizures, bone deformity, fractures and a general inability to thrive, the disorder is generally detected during infancy and early childhood, Ward said.

“Rickets is a serious, preventable disorder that affects infants and children primarily,” she said.

Ward first shed light on what researchers have called a resurgence of rickets in Canada in her 2007 study, which found that the incidence of the vitamin D-deficiency rickets was 12 times higher in Nunavut than for Canada as a whole.

A Government of Nunavut study released in 2009 found that eight in 10 expectant mothers don’t get enough vitamin D.

And in 2007, the Government of Nunavut launched a nutritional strategy aimed at cutting the incidence of rickets in half by 2013 and eliminating it altogether by 2017.

Today, Nunavut sees an average of 12 cases of rickets each year, according to the territory’s health department.

That’s despite a protocol from the Government of Nunavut’s health department dating to 2005 on how vitamin D should be administered to infants, children and pregnant or nursing mothers.

In November 2014, the GN’s health department revised its recommendation to reflect those of the Health Canada and the Canadian Pediatric Society, said territorial nutritionist Allison MacRury.

Now, any infants under two years of age and who live above the 55th parallel should take a daily supplement of 800 international units (IU.)

And health centres across the territory provide vitamin D drops to infants, free of charge, and to nursing or pregnant mothers, MacRury said.

In Canada, vitamin D is also added to milk and margarine.

And it also occurs naturally in many country foods, MacRury explained, such as marine mammals and Arctic char.

As part of a regular diet, Nunavut Food Guide suggests a number of vitamin D-rich foods, like a traditional Inuit diet, but also milk, soy milk and eggs.

But somewhere down the line, it’s clear not all Nunavummiut get the vitamin D supplement they need, Ward said.

“As a first step, we need to understand why — is the knowledge being imparted to families but not being followed through?” she said. “Is it because families cannot afford vitamin D? Or they don’t believe it is necessary?”

Ward said that jurisdictions dealing with rickets could look to education and administration programs, although it would require more study before being implemented as a public health policy.