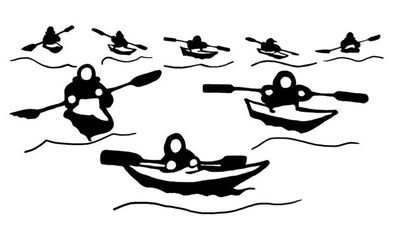 Over a five-week period, QAJAQTUAQ students will learn how to build a traditional qajaq, in Inuktitut, with the help of instructors Moosa Akavak and Eemeelayou Arnaquq. (IMAGE COURTESY OF NUNAVUT YOUTH LEAP)

If you’re Inuk from the Qikiqtani region and you’ve ever dreamed of building a traditional qajaq, an Iqaluit-based organization might be able to help you out.

Over a five-week period, students will learn how to build a traditional qajaq, in Inuktitut, with the help of instructors Moosa Akavak and Eemeelayou Arnaquq.

“The qajaq is one remarkable example of Inuit ingenuity and technological contribution to the world,” said a Nunavut LEAP ad on Facebook.

“In South Baffin, we see plastic ‘kayaks,’ but very few Inuit have the opportunity to build and paddle these boats that were once an integral part of Inuit way of life.”

This workshop will be offered to Inuit, 19 years and older, who are living in Cape Dorset, Iqaluit and Kimmirut, although the workshop itself will take place in Iqaluit.

The sessions will be spread out over the next seven months: phase one includes a two-week classroom-based session, from Nov. 21 to Dec. 2, during which students will build the qajaq.

Phase two involves stitching the canvas and skin to the frame over a week-and-a-half session hosted March 20 to March 29, 2017.

Phase three includes qajaq training and a trip in the newly-made vessels sometime in July and August 2017.

The program is being offered in collaboration with a number of other organizations, including Piqqusilirivvik Inuit cultural school, Qikiqtani Inuit Association and Nunavut Arctic College.

Applicants can apply for one of six spots by Nov. 11. You can request an application form and more information by sending an email to NunavutYouthLEAP@gmail.com.