We want an audit of Nutrition North: Nunavut MLAs

“Another element to addressing food security in Nunavut” 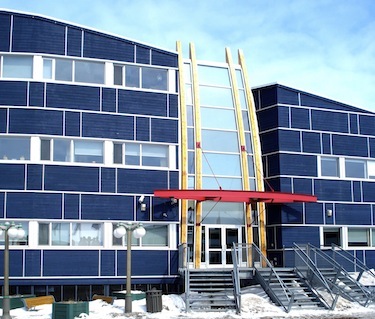 Among the last pieces of business conducted by MLAs before they adjourned their spring sitting in the Nunavut legislature, seen here: pass a motion demanding a federal audit of the Nutrition North program. (PHOTO BY SAMANTHA DAWSON)

MLAs passed a unanimous motion to that effect May 16, brought forward by South Baffin MLA Fred Schell and seconded by Quttiktuq MLA Ron Elliott in the legislative assembly.

“There’s nobody living here who isn’t impacted every single day by the Nutrition North Canada Program,” Schell said, who gave notice of the motion May 14.

Schell said that instead of starting a new program, the problems of the previous food mail program could have been dealt with directly.

Now his constituents tell him they didn’t feel comfortable talking to the Nutrition North advisory board about any issues with the program.

“Take this program out of the hands of retailers… give it to the families,” he said.

Smaller constituencies affected by Nutrition North would welcome the findings of the Auditor General, Schell said.

To that end, the GN’s motion was “clearly necessary,” Elliott said.

It’s an opportunity for MLAs to speak with a clear, unified voice, he said, calling the motion “another element to addressing food security in Nunavut.”

Elliott said that Nutrition North is a critical program, but he’s heard many concerns from his constituents in the High Arctic about the high cost of food.

They ask questions like, “is Nutrition North actually making food more affordable or just ‘less expensive,’” said Elliott, adding that his constituents at first, had high hopes of the program.

Now, Elliott wants to know whether or not Nutrition North’s seven person advisory board is fulfilling its terms of reference.

“I do believe we have been asking the right questions in this house,” he said.

However, a performance audit would be of use to Nunavut and other Canadians who are affected by the program, he said.

Lorne Kusugak, MLA for Rankin Inlet South and Whale Cove, agreed that an performance audit of the food subsidy program would benefit Nunavut.

“It took off in the right direction, we didn’t see a reduction in the price of food,” he said.

Although people should see a subsidy “maybe they are doing an excellent job, maybe we are thinking about it the wrong way,” Kusugak said.

“The only way we’ll find an answer is if we have a performance audit,” he said.

Following the 17-0 motion, Nunavut’s speaker Hunter Tootoo would send the appropriate correspondence to the Auditor General.