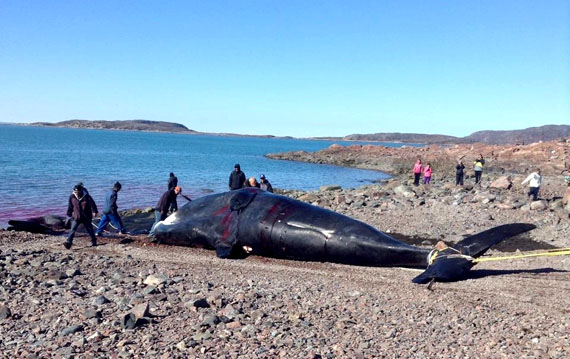 Kugaaruk hunters haul their 31-foot-long bowhead whale catch ashore just outside the community Sept. 1, 2014. Kugaaruk is one of five communities that received bowhead licenses this year. (PHOTO BY LAETITIA APSAKTUAN)

Many Nunavut hunters have prepped their gear and their boats to get ready for this year’s bowhead whale hunts.

But although Ottawa allotted five bowhead tags to Nunavut communities this year — the same number handed out in 2015 — at least one community’s hunt has already been called off.

Coral Harbour received the second Kivalliq bowhead tag this year, however, local sources say they have already cancelled their hunt.

Arviat holds the Kivalliq’s only other bowhead tag. This hamlet’s local hunters and trappers officials report good weather and expect the hunt to continue as planned.

Lucy Qattalik, who’s on the Igloolik bowhead hunt planning committee, said hunters were preparing to leave Igloolik for their base camp Aug. 15.

Two dozen hunters, spread across six boats, will try to make good on the first bowhead tag granted to the hamlet since 2002.

Among those hunters: 16-year-old Daniel Ataguttaluk, the youngest member of this year’s hunting party, who told Nunatsiaq News he’s “excited” to head out on his first bowhead hunt.

In the Kitikmeot, Kugaaruk’s HTO reports that 12 hunters are preparing to start their bowhead hunt in the coming days.

And, with many of the communities reporting good weather, this year’s hunt is already off to a better start than in 2015, when Gjoa Haven cancelled its hunt due to encroaching pack ice in the region.

Naujaat hunters also struggled with unseasonal ice conditions in 2015, but eventually harvested one bowhead whale after a 12-hour overnight ordeal in mid-September.

Nunavut has seen its quota for bowhead whales increase in recent years, first with the Baffin region getting a second bowhead tag in 2014 followed by the Kivalliq in 2015.

The Committee on the Status of Endangered Wildlife in Canada lists bowheads as a species of “special concern,” but the bowhead population in Nunavut has rebounded over the last several decades after being decimated over four centuries of industrial-scale international commercial harvesting.

A 2008 survey by the Department of Fisheries and Oceans estimated that the Eastern Arctic bowhead population could be as high as 43,105 whales.