Prime minister promises to work in partnership with provinces, territories, Aboriginal orgs, many others 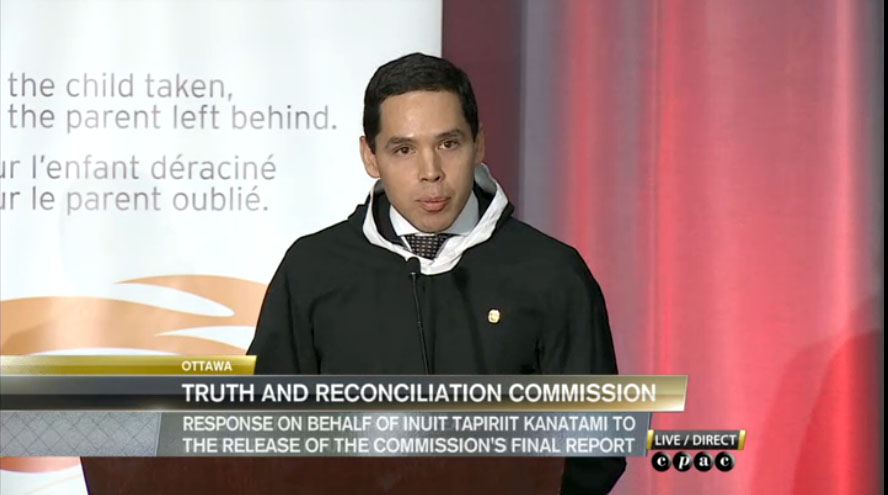 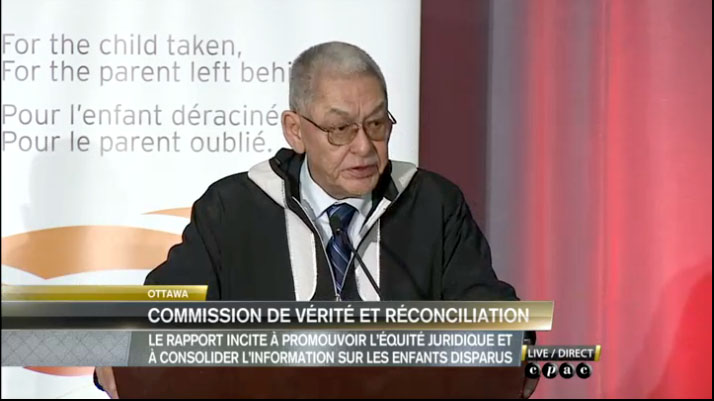 John Banksland of Inuvik, who spent 15 years at residential schools in the Western Arctic, wearing a parka cover made by his niece, Donna Bernhardt. “At one time I was shamed to death, I was one of those students who was shamed to death for being who I was, but today I am very proud to wear this parka cover as a symbol for people who went through what I went through — not to be ashamed anymore as to who you are,” Banksland said. (VIDEO CAPTURE FROM CPAC)

There’s no doubt as to where Prime Minister Justin Trudeau’s Liberal government now stands on the question of what to do with the Truth and Reconciliation Commission’s 94 calls to action.

Following the release of the TRC’s multi-volume final report, the federal government will work with others to “completely implement” its recommendations, Trudeau said Dec. 15.

“In partnership with aboriginal communities, provinces, territories, other important partners, we will completely implement the actions called for by the Truth and Reconciliation Commission,” Trudeau said, putting an end to any speculation that his government may drag its feet.

The federal government had said in the recent throne speech that it would implement TRC recommendations, but did not say how many.

At the same time, many, if not most of the TRC’s calls to action involve areas that lie outside the federal government’s jurisdiction and can’t be done without work by territorial-provincial governments and private organizations.

Those calls to action include:

• numerous justice-related recommendations, including giving courts the power to order treatment for those suffer from FASD.

“The calls to action are centred around a core challenge to Canadian society: a broad lack of understanding of the unjust and violent circumstances from which modern Canada has emerged and how the legacy of residential schools is part of that history and of our country today,” Justice Murray Sinclair, the TRC chair, said Dec. 15.

And the TRC recommends that the Pope make an apology — similar to one given in 2010 to abuse victims in Ireland — for the Roman Catholic church’s role in the abuse of Aboriginal children at Catholic-run residential schools.

The TRC event, held at an Ottawa conference centre, completes the formal work of the commission, which first released its recommendations, and a summary of its report, during a week of closing events this past June.

Trudeau said the federal government will start with what he called “a national engagement strategy” that would involve First Nations, Métis, Inuit, provinces, territories, parties to the Indian residential school settlement agreement and others.

That multilateral work will in turn lead to a national reconciliation framework, which would include the federal government’s formal response to the TRC, Trudeau said.

“Reconciliation is not an Indigenous issue. It is a Canadian issue,” Trudeau said.

Trudeau also confirmed his government will keep a campaign promise to implement the United Nations Declaration on the Rights of Indigenous Peoples — an action that would carry out another TRC recommendation.

And he repeated a throne speech promise to create a new nation-to-nation relationship with Indigenous peoples.

“I give you my word that we will renew and respect that relationship,” Trudeau said.

He also said reconciliation between Canada and Indigenous peoples is bigger than mere legalistic obligations: “We will remember that our obligation to one another transcends official agreements.”

John Banksland, an Inuvialuit residential school survivor from Inuvik, spoke Dec. 15 while wearing a parka cover made by his niece, Donna Bernhardt.

Natan Obed, the president of Inuit Tapiriit Kanatami, said Canada is now faced with a choice between reconciliation and further conflict with Indigenous peoples.

“We have to reconcile every single day. Whether it is about residential schools or many other things that have happened to our society over the past 60 years, we live it day to day,” Obed said.

But Obed said that the TRC’s final report contains truths that can change the country.

“The truth that we now have in these volumes and the truth that has been said over this entire process should change us. It should reach our heart,” Obed said.

Truth and Reconciliation Commission Calls to Action by NunatsiaqNews