We’ll use Arctic Council to reach out to Russia, Ottawa says 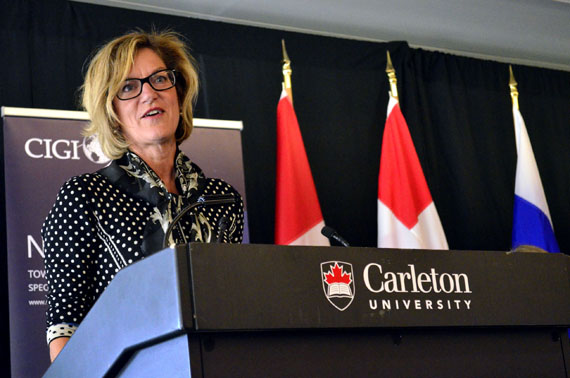 Liberal MP Pamela Goldsmith-Jones, parliamentary secretary to Global Affairs Minister Stéphane Dion, speaking Sept. 29 at an event at Carleton University held to mark the 20th anniversary of the Arctic Council. Dion was to have given the speech himself, but was called away to attend the funeral of Israeli leader Shimon Peres. (PHOTO BY JIM BELL)

“We really have to insist that we need a relationship between Canada and Russia in the Arctic,” Goldsmith-Jones said, reading from an otherwise platitude-laden speech that Dion was to have given at an event in Carleton University held to mark the 20th anniversary of the Arctic Council.

Dion, however, was called away on short notice to attend the funeral in Jerusalem of Israeli leader Shimon Peres and Goldsmith-Jones acted as a stand-in for Dion.

Goldsmith-Jones also confirmed that a Canada-Russia conference on Arctic issues will go ahead at Carleton University in late November, despite Canada’s disapproval of Russian military activity in Ukraine and Syria.

Russia has been a strong military supporter of Syrian President Bashar al-Assad’s embattled regime, which has been involved in a brutal war in which at least 250,000 people have died and millions have been displaced since 2011. Over the past week, Russian warplanes have been conducting airstrikes against sectors within the besieged city of Aleppo that are still controlled by forces opposed to al-Assad’s regime.

Russia also supports separatist militants in Eastern Ukraine and annexed the Ukrainian territory of Crimea in 2014, causing alarm among Baltic and east European states allied with the West.

Canada profoundly disagrees with these Russian activities, but also wishes to develop a relationship that is “rational,” Goldsmith-Jones said.

“We wish to establish links with Russia consciously because we believe that serves the interests of Canadians, of Russians, others like those in Ukraine and Syria,” she said.

And she said that together, Russia and Canada control about 75 per cent of the territory that lies within the circumpolar north.

“Preventing scientists from these two countries from talking to each other is irrational,” she said.

Government ministers, including representatives from Russia, and circumpolar Indigenous organizations met Sept. 28 in Washington, D.C., for a major conference on Arctic science.

Goldsmith-Jones also described NATO’s approach to Russia as a combination of dialogue and deterrence—and portrayed the Arctic Council as a space for continued dialogue.

“At the core of this dialogue will be the North. Because responsible conviction means engaging even when we disagree. Co-operation with Russia on the full range of Arctic issues is simply in our best interest,” she said.

The rest of Dion’s speech listed recent Arctic Council agreements that affect Canada such as its recent agreements on search and rescue co-operation, oil spill containment and black carbon reduction.

It also included a lengthy recitation of standard claims about the Arctic’s importance for Canadian identity, embellished with numerous pseudo-poetic clichés.

“Few places on earth evoke more glorious images than the North. It is the land of the aurora, where the northern lights dance across the darkened sky at nightfall, and the land of the midnight sun and of polar days that go on forever under light that never fades,” Goldsmith-Jones said.

Despite that, John Higginbotham of Carleton University, a senior fellow at the Centre for International Governance Innovation, said the speech will be seen as “important.”

“The government has been relatively quiet on broad Arctic policy for the year it’s been in office. It’s been a very important turning point in underlining the government’s priorities in Arctic matters,” Higginbotham said.