Polar bear population is “stable, and not in decline as predicted” 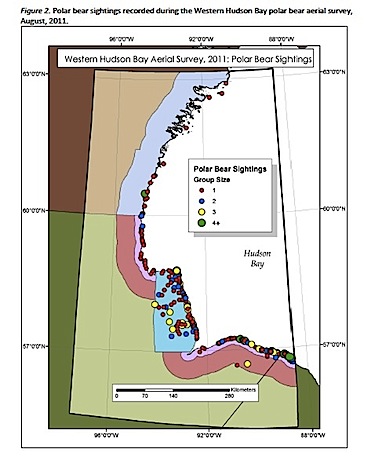 The polar bears spotted in Nunavut during the 2011 aerial survey were concentrated along the coast and islands, particularly in the area south of Arviat. (IMAGE COURTESY OF THE GN)

A new Government of Nunavut survey of the polar bear population in western Hudson Bay shows a “viable” population.

For the GN environment department’s survey, biologists and members of local hunter and trapper organizations spent 100 hours in the air last August, flying in airplanes and helicopters and covering 8,000 kilometres along the western Hudson Bay coast.

The survey puts the latest population estimate for polar bears in that region at more than 1,000 animals.

The GN agreed to the aerial survey — a departure from the usual mark and recapture method, which involves repeated tagging and sampling of polar bears — to verify reports from hunters in the Kivalliq region that the number of polar bears was actually on the rise.

A 2004 Environment Canada study had pegged the number of polar bears at 935 and predicted that climate change would push the population’s numbers down to 610 by 2011.

“We have the information that suggests that the [polar bear] population is at best stable, and not in decline as predicted,” said Drikus Gissing, the GN’s director of wildlife management. “It’s a viable population.”

And that’s good news for Inuit hunters in the region, who say previous predictions of declining polar bear numbers have hurt Inuit quotas.

Gissing said the GN survey results reveal not only a viable population, but also point the way towards a viable method of monitoring the area’s polar bears numbers in the future.

The aerial survey, which provides an accurate sub-population estimate, will likely be the method of choice for future surveys, he said.

The aerial method is well-suited to the flat terrain of the western Hudson Bay coastline but also costs less than on-the-ground methods.

And aerial surveys reduce the disturbance for the animals being monitored, he said.

That responds to concerns from Inuit that the drugging of polar bears, a practice required by the mark-recapture approach, is too invasive and leaves the animals traumatized.

The mark-recapture method does provide a more thorough survey method, Gissing said, because it provides a better picture of the animal’s overall health.

“You can only really assess health by handling bears,” he said. “We can’t say conclusively, but most of the bears were observed [along Hudson Bay] seemed to be in good condition.”

But while Nunavut may opt for aerial surveys in the region, the territory won’t have a say in how nearby jurisdictions like the Province of Manitoba and Parks Canada decide to monitor local polar bear populations.

During the GN’s August 2011 aerial survey, observers found most of the western Hudson Bay polar bear population in Manitoba.

Consistent with the GN’s previous studies in the Kivalliq region, the polar bears spotted in Nunavut were concentrated along the coast and islands, particularly in the area south of Arviat.

Environment Canada is currently preparing its latest mark and recapture data from the western Hudson Bay region, which is expected to be made public in May.

That information will be compared alongside the GN’s latest findings, and presented to a June hearing of the Nunavut Wildlife Management Board.