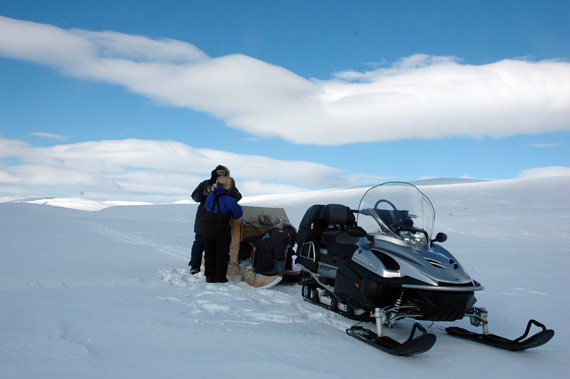 This photo captures the sinking snowmobile before it was completely lost under water near Cambridge Bay. (PHOTO BY RED SUN PRODUCTIONS)

The RCMP says a man who went too close to thin ice off the coast of Cambridge Bay managed to jump off in time but lost his snow machine Nov. 1.

Just after noon that day, a local hunter was heading out on the ice when he felt one of his skis sinking, said Cpl. Yvonne Niego from Iqaluit’s RCMP V Division.

“He was able to jump off on the hard ice side and head back to town on foot,” said Niego.

After telling friends and family members what had happened, a retrieval crew was quickly organized to try to salvage the man’s Polaris snowmobile and rifle.

But Niego said a member of the local RCMP detachment caught wind of the plan and headed off the crew before they reached the site and convinced them it was too unsafe to try to save the machine.

Shortly after that, the snowmobile slipped below the ice and disappeared Niego said. Since then, the Ekaluktutiak Hunters and Trappers Organization has put up posters around town warning hunters to beware of unsafe ice on the bay.

Niego said the hunter admitted his ski rods were not in great shape and that might have contributed to the machine pulling away from shore instead of heading in a straight line.

“So there are good lessons there, maintain your equipment, make sure you know the ice conditions, pack for the weather,” Niego said.

The man is lucky he rolled off the snow machine on the correct side otherwise he might have stepped into the soft ice, she said.

“Rescue crews could have gone down as well,” she said.

Cambridge Bay mayor Jeannie Ehaloak said Nov. 5 that the hunter does not wish to be identified. “It was just a freak accident, and unfortunately that man lost his machine,” said Ehaloak, who was just acclaimed for another term as mayor on Nov. 4.

She said temperatures have been warmer than normal this time of year in Cambridge Bay and it’s taken longer for the ice on the bay to form.

“It’s usually pretty solid by now,” she said. “People are just keeping an eye on it. A few days ago, there was still steam coming off the ocean so we knew it was still freezing up.”