This photo, posted on the Cambridge Bay Facebook page, shows the community’s basketball hoop down and bent on the court. 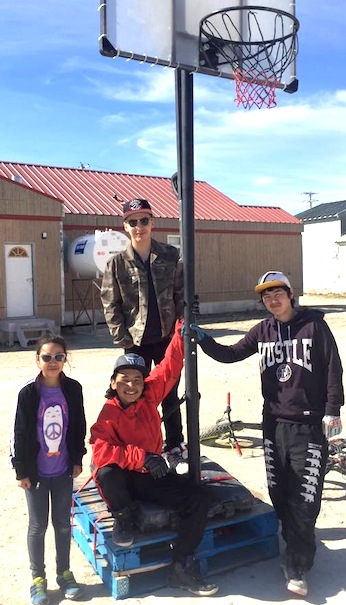 Here’s the new basketball hoop donated by Terry Aknavigak, which was posted on the Cambridge Bay Facebook page.

Youth in Cambridge Bay have a new basketball hoop on their community’s court, replacing one that vandals, who spray-painted the words “No more ball court,” destroyed earlier this month.

“This is for the kids enjoyment of playing, not vandalizing. If you see anyone caught vandalizing my hoop, please let me know,” said Terry Aknavigak, who donated his hoop and then helped set it up with Lawerance Greenley and Kayla Aknavigak.

“Koana for your kindness, care, love of our youths, your exceptional God Bless you n your family‬‬,” was the response from Joanne Avalak-Paneguk to Aknavigak’s donation in a message posted on Cambridge Bay’s Facebook news page.

Vandalism has been a recurring problem in in this western Nunavut community of about 1,800 people, averaging roughly 40 reports to police per month — but some community members say the level of vandalism is even higher.

And the long, warmer days of summer fuel the problem, they say.

Police said earlier this year that youth had committed more than 100 acts of mischief since the beginning of 2016: 36 incidents in March, 35 in February and 42 in January — up from the same period in 2015.

In early June — before the destruction of the basketball hoop— people in Cambridge Bay said they were outraged over repeated outbreaks of vandalism, ranging from graffiti to costly break-ins.