Kiilinik High School students line up Oct. 16 to vote in their school’s mock election, carried by the NDP. (PHOTO BY JANE GEORGE) 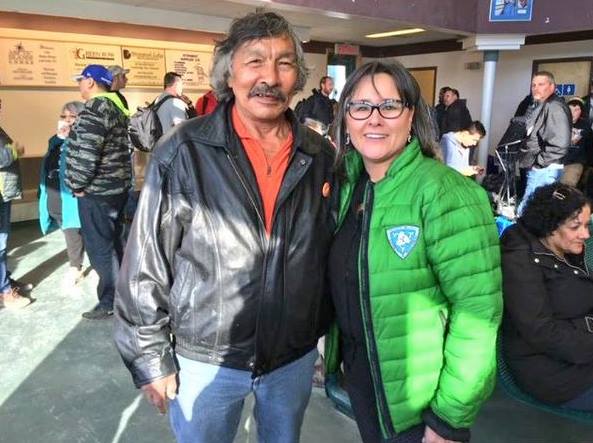 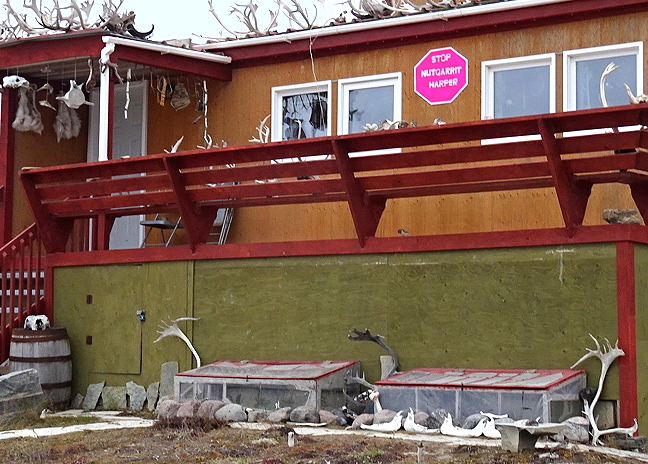 A “Stop Harper/ Nutqarrit Harper” sign hangs on the side of a house in Cambridge Bay. (FILE PHOTO)

CAMBRIDGE BAY — In the western Nunavut town of Cambridge Bay, incumbent MP Leona Aglukkaq’s home turf, you can’t find any posters supporting her re-election campaign around this community of about 2,000 people.

But there are red Liberal party placards for candidate Hunter Tootoo set up at key intersections and posted in the windows of many houses, while a “Stop Harper/ Nutqarrit Harper” sign — in English and Inuinnaqtun — remains prominently displayed outside one home.

A longtime Conservative voter in Cambridge Bay told Nunatsiaq News that she asked a local Aglukkaq supporter for Tory campaign posters — but never received any.

That, she said, contributed to her decision to vote for a different party in the Oct. 19 federal election.

However, during this year’s election campaign, visits to Cambridge Bay by all three leading party candidates in Nunavut — Aglukkaq, the New Democratic party’s Jack Anawak and the Liberal party’s Tootoo — seem to have sparked more interest in the election.

Although Aglukkaq visited Cambridge Bay this past September, where she observed the Inuit Tapiriit Kanatami annual general meeting, many residents said they never saw Aglukkaq and didn’t know she was in town.

“She’s taking us for granted,” a voter said about Aglukkaq’s apparent lack of local campaigning.

During her visit to Cambridge Bay, Aglukkaq organized no public meetings. She did speak to Nunavut Arctic College students in the office administration program, as did Anawak and Tootoo during their campaign stops.

But the NDP and Liberal candidates also invited members of the public to meet with them in Cambridge Bay, with Anawak even setting up shop one afternoon outside the co-op store to recruit more support.

“It’s the only time I’ve ever seen active campaigning in Cambridge Bay,” said a young woman who voted in the advance poll at the Elders Palace — as many decided voters said they did — and all of them told Nunatsiaq News that they were voting for change, either for the NDP or the Liberals.

In an interview earlier during the campaign with Nunatsiaq News, Aglukkaq said that her constituents tend to vote for the person, not the party, and she said she’s confident they have faith in her leadership.

One voter said he planned to vote Oct. 19 for Aglukkaq because he said she’s done more for the North than previous MPs, even though he’s no fan of Prime Minister Stephen Harper.

But the election dynamic this year, at least in Cambridge Bay, has put more focus on party leaders and their messages.

Some people said Liberal leader Justin Trudeau’s Oct. 10 visit to Iqaluit changed how they would vote, that they don’t like Harper — who’s visited Cambridge Bay on several occasions during his annual northern tours — or what they’ve seen of NDP leader Thomas Mulcair.

Many say they intend to follow national polling predictions about which party may win nationally to guide their vote. That’s because they want Nunavut to have an MP aligned with the winning party.

And there’s also a new ability to follow online news in Cambridge Bay. Thanks to generally reliable internet and 3G service on smartphones, others have gone online during the 78-day campaign to check out the party platforms and closely follow campaign coverage on websites and social media.

Among the issues of interest to them: plans to improve food security, health care, infrastructure and action on Aboriginal concerns, including the recommendations of the Truth and Reconciliation Commission and an inquiry on missing and murdered Indigenous women.

An unofficial classroom vote taken among Cambridge Bay’s NAC office administration students, held Oct. 2, after they had met candidates and discussed party platforms, saw the NDP tying with the Tories.

An Oct. 16 mock vote at the community’s Kiilinik High School resulted in an NDP win, with its candidate taking more than 60 per cent of the vote.

Some young voters didn’t know that Aglukkaq actually started her political career in Cambridge Bay, where she served six terms as a municipal councillor, or that she then went on to serve in the Nunavut legislative assembly as the MLA for Nattilik, also serving as Nunavut’s finance minister and minister of health and social services.

In 2008, Aglukkaq was first elected MP for Nunavut and became the first Inuk to serve in the federal cabinet, first as health minister, and later, after her re-election in 2011, as environment minister.

In 2011, Aglukkaq won by a margin of 1,751 votes over the Liberals’ Paul Okalik, who took 2,360 votes. NDP candidate Jack Hicks finished third with 1,603 votes and Green party candidate Scott MacCallum finished a distant fourth with 173 votes, or 2.1 per cent. Voter turnout was 48.5 per cent across Nunavut.

Aglukkaq was part of a blue wave that swept the country, delivering a majority government for Harper. The Tories won 167 seats nationwide, dominating in Ontario and the West.