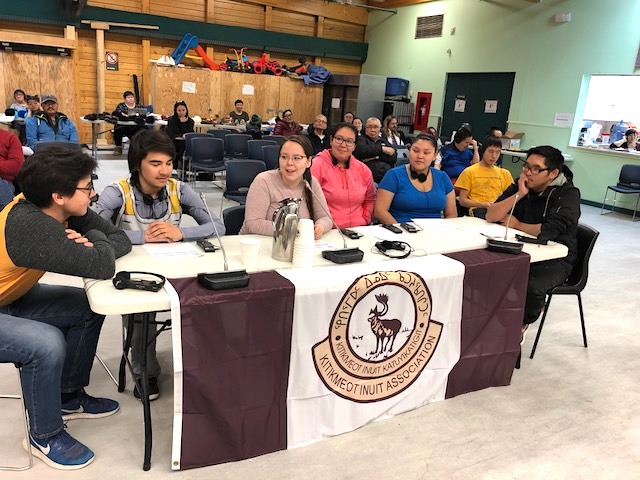 Youth delegates at the Kitikmeot Inuit Association talk about the issues that concern them on Oct. 18, at the KIA’s annual general meeting. (PHOTO BY JANE GEORGE)

CAMBRIDGE BAY—Youth in western Nunavut want more housing, less poverty and better, or what they call “proper,” parenting, in which parents take an active role to improve the quality of life and success of their children.

“We want to see our community members and parents encouraging their children to go to school every day,” the report states.

“We can’t rely on only the schools to solve this issue.”

Youth also said they are worried about increasing levels of violence, bullying, stealing, vandalism in the communities, and the increased number of armed standoffs: “Something must be done. Guns are easy to access and often used in standoffs and suicide.”

More education on the safe handling and storage of guns is needed, they said.

And they noted the increased prevalence of drugs and alcohol in the communities, along with a need for addictions treatment.

“There are more hard drugs coming into Cambridge Bay and the youth are getting their hands on them,” said Kobe Aknavigak of Cambridge Bay.

But in Kugaaruk, Shantel Qirngnuq said that despite activities like hockey and Junior Rangers, there are not enough organized activities to keep youth in this community of about 1,000 busy.

So children are making home brew, she said, and sniffing gas, with too many “unhealthy adult relationships affecting the youth.”

In a resolution later approved by the KIA AGM, youth also asked for more sex education to deal with the high pregnancy rate among teenagers.

And they also asked to be kept informed about how climate change will affect their lives.

Some of the same points were raised by women and elders in their reports to the KIA meeting, which wrapped up Oct. 18.

With the shortage of housing and evictions, family members tend to stay with elderly relatives. “That can cause conflict within the family,” she said.