“This is one part of a very complex issue. But where is the support going to come from?” 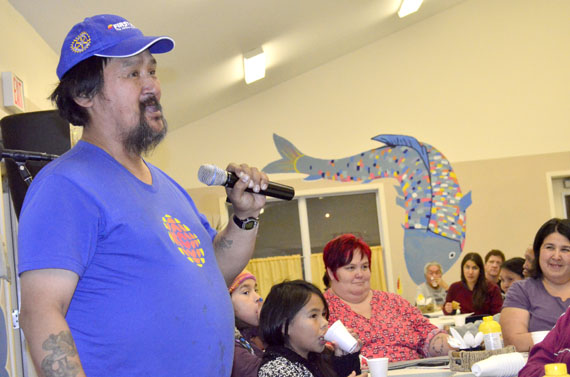 Don Kunuk of Iqaluit speaks at a discussion on hunger and poverty held Oct. 17 at the Iqaluit soup kitchen. (PHOTO BY JIM BELL) 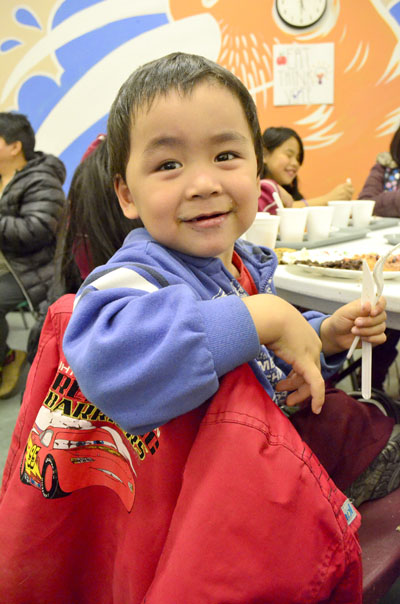 Little Aqiggik Angoyuak of Iqaluit gets ready to tuck into a tasty meal at the Iqaluit soup kitchen Oct. 17. Volunteers served up seal pie, mashed potatoes, salad and bannock. (PHOTO BY JIM BELL)

Some are on the verge of abandoning all hope and others still smile and fight every day to survive.

But those who suffer from Nunavut’s brutal cost of living — whether unemployed or among the working poor — agree the territory’s income support system is failing.

That’s one message that emerged from a supper-hour discussion on hunger and poverty hosted Oct. 17 by the Qayuktuvik Society at the Iqaluit soup kitchen.

“The cost of living in the North is unbelievable. We Nunavut people seem to be more like visitors than like Nunavut land claim beneficiaries,” one woman said.

This woman, who said she was once employed as a social worker, now receives only $626 a month from the Nunavut government to feed herself and two children.

That includes a disability allowance of only $175 a month, the woman said.

On that tiny income, she would go hungry for days were it not for the food she gets at the Iqaluit soup kitchen, she said.

But the Conservative incumbent, Leona Aglukkaq, was campaigning that day in Kimmirut, NDP candidate Jack Anawak was in Cape Dorset and Green party candidate remained at home in Alberta.

That left Liberal candidate Hunter Tootoo as the only Nunavut candidate able to attend.

Tootoo, with the help of interpreter Don Kunuk, made some brief remarks, reciting some of his party’s social policy pledges including a promise to spend $40 million a year more on a beefed up Nutrition North Canada program, a promise to raise the maximum value of the Northern Residents Deduction to about $8,000 a year and index it to inflation, and a promise to move the age of eligibility for the Canada Pension Plan back to 65 from 67.

At the end of the evening’s meal — which included seal meat pie, mashed potatoes and salad — Sara Statham, a Qayuqtuvik board member, co-ordinated a discussion on hunger and poverty.

That prompted Annie Angoyuak, a single mother with a full-time job, to get up and say the needs of the working poor do not get sufficient recognition.

That’s why she takes her little son, Aqiggik to the soup kitchen, she said — to make sure he gets enough to eat.

“Every month, we need help. It’s not just for the unemployed but for the working poor,” Angoyuak said.

“This is one part of a very complex issue. But where is the support going to come from?”

Another woman, who broke down before she could finish speaking, said she struggles to look after two grandchildren who are neglected by their parents.

“We get no help from income support,” the woman said. “I don’t even know where my rights are. That’s how Nunavut is, it’s so out of control.”

“What is the basic income you need to survive?” she said.

Another woman, in response to a question that Statham posed — what are our strengths? — said “there are no strengths.”

But others are not so bitter and disillusioned.

“The strength is people like us,” one man said.

“We have to just feed each other,” said another woman, who pointed to school breakfast and after-school programs as examples of efforts that need more support.

All that involves unpaid labour contributed by more than 135 volunteers, who collectively put in 2,565 volunteer shifts for a total of 5,791 volunteer hours each year, the society says.

Doug Cox, the executive director of the Uquutaq men’s shelter, said that includes donations of about 4,000 pounds of “waste food” that Iqaluit’s grocery stores contribute to the kitchen.

Surveys also reveal that 82 per cent of people who use Iqaluit’s community-based food programs say they suffer less hunger and 32 per cent say the soup kitchen’s programs provide improved well-being.

And 26 per cent of users say these programs reduce their sense of hopelessness. 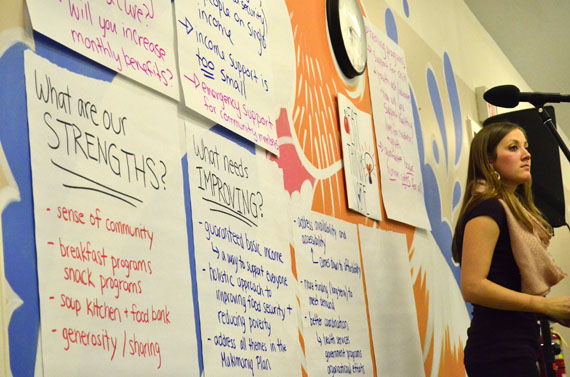 Sara Statham, a Qayuqtuvik Society board member, leads a discussion on how to reduce hunger and poverty in Nunavut at a supper-hour event held at the Iqaluit soup kitchen. (PHOTO BY JIM BELL)