Why not feast on country food this Christmas? 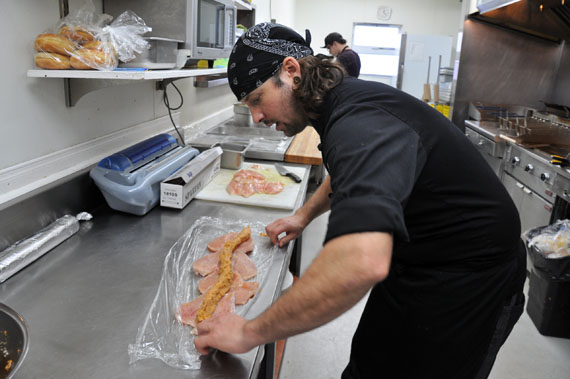 Kuujjuaq chef Samuel Hamel-Ratté is at work stuffing chicken breasts in the kitchen at the Kuujjuaq Inn. (PHOTO BY SARAH ROGERS)

Samuel Hamel-Ratté doesn’t get to cook with country food as much as he’d like to.

The long-time head chef at the Kuujjuaq Inn can only use fish and meat that comes from government-regulated facilities.

But Hamel-Ratté said he enjoys cooking with country food at home, when he can.

In the years he’s called Kuujjuaq home, Hamel-Ratté has noticed that Inuit don’t keep caribou bones—they usually feed them to their dogs.

“But they should keep them and make demi-glace,” said the chef, referring to the rich brown sauce in French cuisine that is served over roasted meats or steaks.

“It’s very good and you can make this with any animal, like ptarmigan or goose.”

Hamel-Ratté shared a recipe with Nunatsiaq News that’s based on an Epicurious recipe that uses veal bones, which he swaps out for caribou.

Preheat the oven to 350°F. Spread the bones, carrot, onion and celery on a rimmed baking sheet. Roast, tossing several times, until the vegetables and bones have begun to take on colour, about one hour.

Transfer the roasted vegetables and bones to a five-quart stockpot. Add eight cups of water and the bouquet and bring to boil. Reduce heat and simmer gently, uncovered, until the liquid measures approximately two cups—this should take about two hours.

Remove and discard bones and bouquet. Strain out the vegetables and reserve liquid, sometimes called the “glace de viande.” Use the gravy separator to skim off the fat.

Next, spray a large sauté pan with canola oil and warm over medium heat. Add shallots and garlic and cook, stirring, until shallots are translucent.

Add wine and sherry and simmer, stirring and scraping up browned bits from the bottom of the pan, until the liquid is almost evaporated, about four minutes.

Add the glace de viande and 3/4 cups water. Bring to a boil and simmer until the demi-glace measures two cups, which should take about five minutes. Season the sauce with salt and pepper.

In a small bowl, stir together the cornstarch and one tablespoon of water to form a paste. Stir the paste into the demi-glace and simmer until thickened, about one minute more. Now the sauce is ready to garnish whatever meat dish you’re serving; it can also be used as a base for soups.

Many families have a particular breakfast meal that has become an annual tradition on Christmas morning. For Michael Lockley, head chef at Iqaluit’s Inclusion Café, it was always beef hash growing up.

“So I adapted a caribou version,” Lockley said. “Caribou is easy to overcook and it gets hard and chewy, so take care to cook it quickly and not too long.”

“I prefer my hash to have a bit of texture so I recommend a dice of a half inch or so,” Lockley suggested. “That’s why I precook the main ingredients separately, then combine them. It’s less mushy like that.”

Coat the bottom of a skillet with vegetable oil and quickly sear all sides of the caribou on high heat.

Finish the cooking in an oven pre-heated to 350 degrees for about five minutes, depending on the thickness of the meat (caribou should be cooked to an internal temperature of 135 degrees.)

Cool for five minutes. Dice the meat and set it aside.

Deglaze the pan and use it for gravy if desired.

Scrub potatoes under running water (no need to peel them), dice them to half-inch chunks. Place the potatoes in a pot, cover with cold water and generously salt the water.

Bring to a boil and then simmer for seven minutes, or until the tip of a sharp knife goes into a potato with a little resistance.

Chop onions, celery and carrots to the same size as the meat and potato chunks. Oil a large frying pan or saucepan, and sweat the vegetables on medium heat with some added thyme, salt and pepper.

Mix the meat, potatoes, and vegetables together in a casserole dish. Add a cup of vegetable stock, or water, and cover, first with parchment paper and then aluminum foil.

Serve the hash while it’s still hot. Drizzle with extra-virgin olive oil and fresh chopped parsley or green onions. Top the hash with a poached egg, if desired, or some caribou demi-glace.

For many Nunavummiut, the holiday season marks a time when igunaq is ready to be harvested from the ground.

In his home region around Igloolik, raw walrus meat is usually prepared in mid-July, after the walrus hunt.

The walrus is sewn up, with the fat and meat attached to the skin, and buried underground near the permafrost to ferment.

It has to be buried on granite stones to ensure that air gets in, but no light, Quassa explained.

About six months later, in mid-December, the walrus is dug up, sliced and enjoyed by Iglulingmiut.

The best igunaq is prepared by experienced walrus hunters, Quassa said, like elder Louis Utak who grew up right on Igloolik Island.

“It is always a special treat around the holidays to enjoy igunaq, because it lets us celebrate and share the successful catch of our talented hunters,” he said.

—With files from Beth Brown