Nunavut court kept humming in 2015, despite recent drop in crime

Despite complaints, stats show Nunavut courts among the quickest in Canada 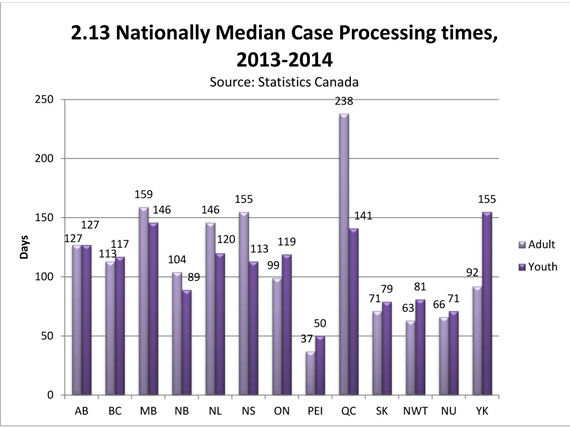 This graph shows that Nunavut courts process criminal charges more quickly than any other jurisdiction in Canada, except for Prince Edward Island, and that Nunavut is virtually tied with the Northwest Territories for the median amount of time between first and last court appearance. (IMAGE FROM NUNAVUT COURT OF JUSTICE)

Though Nunavut’s total number of criminal charges stayed well below peak numbers reached between 2008 and 2012, the Nunavut Court of Justice kept busy in 2015, the NUCJ’s annual report reveals.

In 12 communities, the charging rate rose, with Rankin Inlet, at 727 total criminal charges, suffering an 80 per cent increase in 2015 over the previous year.

For the most part, the total raw number of criminal charges per community in 2015 was in proportion to the population of each community.

Despite widespread complaints about how long it takes for Nunavut courts to deal with charges, Statistics Canada numbers quoted in the report show that — except for the Northwest Territories and Prince Edward Island — Nunavut processes criminal cases faster than any other jurisdiction in Canada.

The median amount of time between first and last court appearances for adult criminal charges in Nunavut is only 71 days, the StatsCan numbers found.

In contrast, the median amount of time between first and last court appearances in Quebec is 238 days and in Ontario, 119 days. 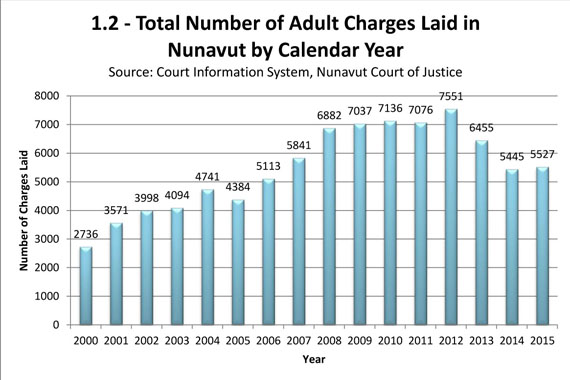 This graph shows that the number of adult criminal charges laid in Nunavut in 2015 increases slightly over the previous year, after dropping rapidly in 2013 and 2014. (IMAGE NUNAVUT COURT OF JUSTICE)