If not, Arctic temperatures could rise by average of six degrees 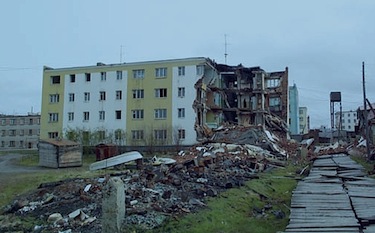 The destruction of melting permafrost: uneven settling due to permafrost thaw destroyed this apartment building in Cherski, Siberia, which occurred only days after the appearance of the first cracks. (PHOTO COURTESY OF UNEP) 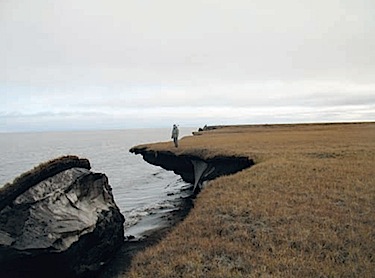 The power of permafrost: warming permafrost softens coastlines, making it more vulnerable to wave action and promoting erosion along the Arctic coast of Alaska. (PHOTO COURTESY OF UNEP)

The world needs a better understanding about how permafrost loss may speed up global warming, says a report by the United Nations Environment Program.

The report, released as UN climate change talks start up again in Doha, Qatar, calls for an Intergovernmental Panel on Climate Change assessment on permafrost.

It also recommends that nations with extensive permafrost create permafrost monitoring networks as well as plans to mitigate the risks of thawing permafrost.

These nations where you can find permafrost include Canada, Russia, China, and the United States.

“The infrastructure we have now is not adequate to monitor future changes in permafrost,” said the report’s lead author, Kevin Schaefer of the National Snow and Ice Data Center.

“We need to greatly expand our current networks to monitor permafrost, which requires direct investment of money and resources by individual countries.”

Nations like Canada need to evaluate the risks of thawing permafrost and make plans to protect communities in the most vulnerable regions, he said.

Or else homes, businesses, and other infrastructure in Arctic, which were built on ground that used to stay frozen, may collapse if this ground thaws.

Permafrost is ground that stays frozen for at least two years in a row.

The report, called Policy Implications of Warming Permafrost, warns that, as permafrost thaws, it will spew more climate-warming greenhouse gas emissions into the atmosphere, which, in turn, will increase global warming even more.

And there is no way to put those emissions back into the permafrost, Schaefer said.

The heat produced by thawing permafrost would mean that the current efforts to curb greenhouse gas emissions may not be enough to keep the keep the world’s temperature increase to two degrees by 2100.

“This report seeks to communicate to climate treaty negotiators, policy makers, and the general public the implications of continuing to ignore the challenges of warming permafrost,” said UN under-secretary general and UNEP executive director Achim Steiner.

According to the report, Arctic temperatures are expected to increase at roughly twice the global rate, and there will be “substantial loss of permafrost by 2100.”

And a global temperature increase of three degrees means a six degree increase in the Arctic, the report says.

That will result in “an irreversible loss of anywhere between 30 to 85 per cent of near-surface permafrost.”