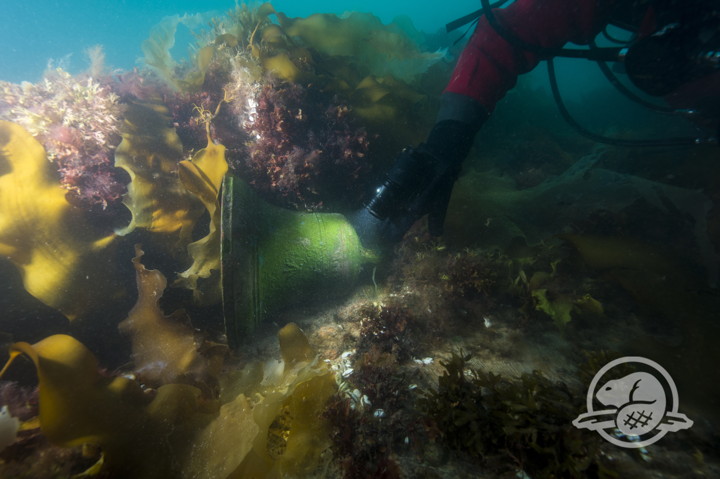 The first major artifact recovered from Franklin’s HMS Erebus, which sank in Queen Maud Gulf in 1846 and was discovered in 2015, was the ship’s bell, seen here during a reconnaissance dive by a Parks Canada team of underwater divers and archaeologists.(IMAGE COURTESY OF PARKS CANADA)

A piece of Nunavut’s history lies at the centre of a dispute between the territorial and federal governments, and even the British government, with each side claiming ownership over the relics of the famed Franklin wrecks.

In September 2014, Parks Canada underwater archaeologists discovered the wrecked HMS Erebus in the Queen Maud Gulf, one of two ships that left England in 1845 on an Arctic expedition under the command of Sir John Franklin.

Since the discovery, all 55 objects retrieved from HMS Erebus remain in Ottawa for conservation, including the ship’s bell.

But Nunavut Premier Peter Taptuna confirmed this week that discussions are ongoing regarding the ownership of certain relics found aboard the HMS Erebus, and what’s expected to be found when divers locate its accompanying ship, the HMS Terror.

“With the discovery of the wreck of one of Franklin’s ships in 2014, there are some disputes on ownership of certain relics, certain things that are found under the seabed,” Taptuna said in question period March 9 in the Nunavut Legislature.

“We are working very closely with our partners of Parks Canada to ensure that things are done in a proper fashion. There are also claims out there by the British government for ownership on relics that may be found.”

Under Article 33 of the Nunavut Land Claims Agreement, archeological artifacts found within the Nunavut settlement area are owned jointly by Inuit and by government.

Taptuna’s comments come on the heels of a national CBC News report that details the dispute among the different jurisdictions connected with the Franklin wrecks and the continuing search for the HMS Terror.

The CBC report found that Nunavut refused to authorize diving permits for Parks Canada’s to explore the Kitikmeot waters around the wrecks in both 2015 and again in 2016 unless the department agreed that any relics from the MHS Terror would stay in the territory.

Nunavut’s Department of Culture and Heritage would not comment on the matter.

The continuing discussion over the future of the artifacts discovered from both wrecks includes Kitikmeot Inuit, particularly those in Gjoa Haven, closest to the archeological site.

“It is very important that artifacts from the Franklin expedition be put on permanent display in the community of Gjoa Haven,” said the community’s MLA, Tony Akoak, in the legislature March 9. “As my community is part of this piece of history.”

Under Nunavut’s land claim, all archeological specimens discovered within the territory are to be jointly owned by the federal and territorial governments.

Also, to create a heritage site around the area, the federal government must also negotiate an Inuit impact and benefit agreement with the Kitikmeot Inuit Association.