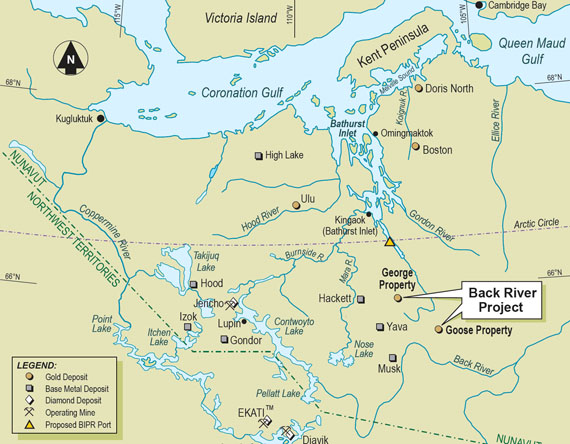 This map shows the original version of Sabina’s Back River gold project as submitted to the NIRB in 2012. Development of the George property was later deleted from the proposal and was not included in the project that NIRB considered in a public hearing last spring. (FROM BACK RIVER PROJECT DESCRIPTION)

Just a few days after the federal government rejected the Nunavut Impact Review Board’s recommendation that the Back River gold project not go ahead, the World Wildlife Fund has weighed in with a statement that warns against creating new threats that could damage the region’s shrinking caribou herds.

The NIRB had recommended in June 2016 that the Back River gold mining project, proposed by Sabina Gold and Silver Corp., not be approved on the grounds that it could do damage to the region’s dwindling caribou herds that cannot be mitigated.

Notwithstanding that, the federal government rejected the NIRB report this past Jan. 12 after the Kitikmeot Inuit Association, the Government of Nunavut, hamlet councils and hunter and trapper organizations rallied to the mining company’s defence.

The KIA, which owns most of the land the project sits on, even suggested the NIRB may have overlooked KIA’s Aboriginal rights under Section 35 of the constitution.

That’s because the NIRB did not consider a last-minute joint submission that that KIA and GN submitted at the end of a public hearing in Cambridge Bay this past April, proposing new terms and conditions for protecting caribou from the impact of mining operations.

“The NIRB report does not specifically address or consider these terms, and as such, KIA cannot determine if our Section 35 rights have been fully accommodated at this time,” KIA president Stanley Anablak told the federal government in a letter this past August.

But the WWF said in its Jan. 15 statement that “those measures are untested and unproven.”

“Now is not the time to test new, risky mitigation measures when the Bathurst herd has declined to five per cent of its historic high and the species as a whole has been newly assessed as ‘threatened’ in Canada,” said Paul Crowley, WWF’s vice president of Arctic conservation.

But Carolyn Bennett, the minister of Indigenous and Northern Affairs, said in the federal government’s Jan. 12 letter that the NIRB did not give enough consideration to the KIA-GN-Sabina submission, possibly because it was made at the last minute.

“It therefore seems reasonable to believe that there could be an avenue for fruitful discussion that has not been fully explored,” Bennett said.

The Back River project will now go back to the NIRB for more review or for more public hearings.

Sabina said in September that this move would likely add two years to the mine’s projected timeline for development. 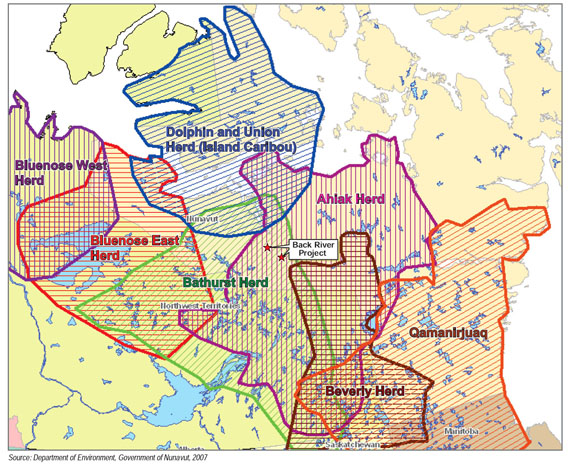 This map shows the caribou ranges around the Back River project. The Bathurst herd has suffered a 95 per cent decline since 1986, having shrunk to a population of only 16,000 from a high of 470,000 in 1986. (FROM BACK RIVER PROJECT DESCRIPTION)