“Are there some common factors that these northerners have?” 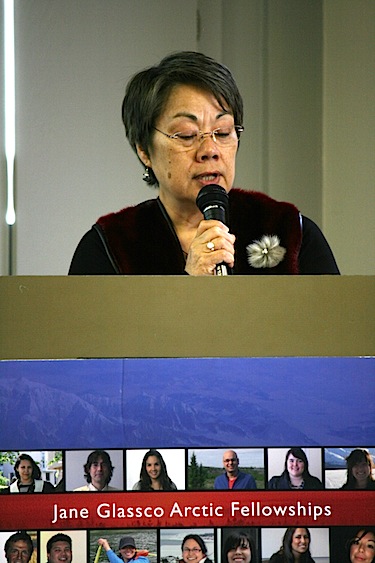 When Eva Aariak was just a girl, Inuit struggled to get their voices heard.

“We had to contend with authorities outside the Arctic that were convinced [they] knew what was best for those they imagined,” she said June 27 at an event showcasing research by the Jane Glassco Arctic Fellows.

It wasn’t easy then — but it is better now that Nunavut is established, and policy is made specifically for the North.

“Now that Nunavut is a reality, we face the challenge of shaping institutions, laws, policies, and services according to the values of Nunavummiut, and our way of doing things,” Aariak told the group of 12 northern researchers, aged 25 to 35.

Their two-year study, released June 27 at Iqaluit’s Frobisher Inn, spells out what makes a leader in the North, with the ambitious goal of shaping policy for the future.

The group project, called Becoming Resourceful, Resilient, Rooted Leaders (Sapiliqtailimaniq), looks to “pinpoint the kinds of learning environments — within the education system and beyond — that best fosters the emergence of ‘leaders’ in northern Canada.”

Twenty recognized leaders in the North were interviewed for the project, undertaken by Arctic fellowship program participants from the three territories, Nunavik and Nunatsiavut.

The research wanted to “foster an individual’s positive contribution to their communities,” said Nadia Joe from Haines Junction, Yukon.

“We wanted to understand, across the North — is there some common factors that these northerners have that have enabled them to continue on this path and contribute to their communities in meaningful and beneficial ways?” said Joe.

What they found among leaders they interviewed and researched were nine themes, such as relocation, positive upbringing (by family members and the community), and education in traditional teachings and skills.

Now, they hope this project may help spearhead public policy change — but that’s something that could have to wait said Thomas Axworthy, president and chief executive officer of the Walter and Duncan Gordon Foundation, that supports the Jane Glassco Arctic Fellowship Program.

Aariak said she’s hopeful that this study, and many of the fellows’ individual research projects, makes it to the political field.

“I hope your research, and this public policy forum, will unleash some of these new perspectives on how to rethink government,” she said.

Changes have already been seen in other jurisdictions within the short two-year study period, said James Stauch, the vice-president of programs and operations for the Walter and Duncan Gordon Foundation.

“You will be hearing a lot about these people in the future. They are our future premiers and MPs,” Stauch said.