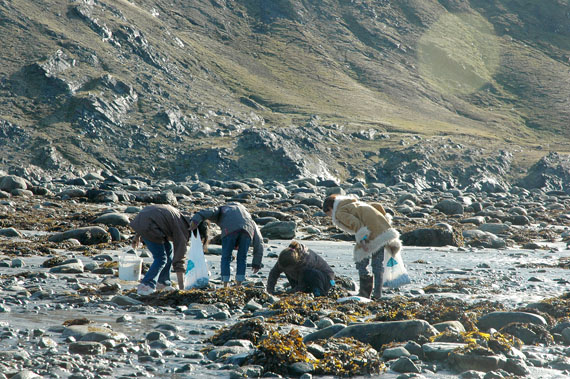 A group of young Kangiqsujuamiut girls collect mussels along the shore of Wakeham Bay. (PHOTO BY SARAH ROGERS)

Nunavik’s mussels are among the highest quality and least contaminated in the world.

So says a study published in the Canadian Journal of Microbiology, which found low levels of bacteria on samples of mussels living near Nunavik villages – even in habitats potentially contaminated by sewage.

Benoit Lévesque, a Laval University researcher and the study’s lead author says Nunavik’s species of blue mussels register lower bacterial amounts than those found in Europe, along the U.S. coast and in the St. Lawrence River.

All the mussel samples collected in Nunavik were free of common bacteria like E.coli and salmonella, which are often found in European mussels and other molluscs.

Mould on the mussels contains protozoan parasites – transmitted through the feces of birds and marine animals – that can cause chronic or prolonged gastrointestinal problems in people who consume them.

For that reason, the study concludes that Nunavik’s mussels should be cooked before consumed.

Lévesque acknowledges that many Nunavimmiut eat their mussels raw, adding that it’s possible that those who eat them regularly might build immunity against the pathogens.

“But we believe it is better not to take risks,” Lévesque said. “That’s why we recommend people cook the mussels thoroughly before eating.”

Studies on the mussels were done between 2004-2007 in collaboration with Health Canada, Nunavik’s regional health board and Makivik Corporation.

Researchers collected two-kilogram samples of mussels from five Ungava coast villages as well as in Inukjuak.

As mussel beds are gathered near the shoreline, they can sometimes be found near the site of sewage discharge and researchers wanted to find out if they posed health risks.

Lévesque says the study gives researchers an idea of the microbiological quality of molluscs in the Arctic, but a more exhaustive study needs to be done.

In the meantime, Lévesque says Nunavimmiut should have access to information on water quality and what areas are safe to harvest seafood, such as through the Canadian Shellfish Sanitation Program.

The federal program indicates regions where water quality has met Canadian criteria, although it doesn’t include data on Nunavik.

That information could be helpful to harvesters, he said, because global warming may increase the risk of contaminated mussels in the future.