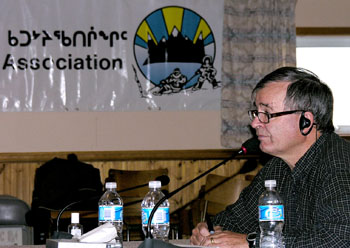 “There have been a lot of negative reports in the national press about Nunavut… I’m going to challenge these negative views,” Patterson said.

Patterson, who spoke to QIA’s board of directors on the afternoon of Oct. 23, said he disagrees with a column by Jeffrey Simpson published Oct. 20 in the Globe and Mail, entitled “Nunavut’s economic dreams are icebound.”

Also on Oct. 20, the Globe published a news story, “Ten years in, Nunavut gets failing grade,” which was based on the results of the Nunavut government’s Qanukkanniq Report Card.

“There is no reason to be hopeless. We have to be positive,” he said.

Patterson had just finished telling QIA directors that Ottawa’s perception of Nunavut’s capacity problems is likely making the federal government reluctant about moving forward on the devolution of responsibility for public lands and resources.

Paul Mayer, a Montreal lawyer hired in 2006 to advise the federal government on the issue, recommended that devolution talks move slowly and be tied to improvements in Nunavut’s human resource capacity.

After that, the Government of Nunavut, Nunavut Tunngavik Inc. and the federal government signed a protocol setting out what the first phase of devolution talks would cover.

But because the federal cabinet has yet to authorize a negotiating mandate, formal devolution negotiations haven’t yet started.

“There’s been almost three years of talk, but nothing has happened,” Patterson said.

He said that if the federal government is concerned about the territory’s capacity problems, then it should do more to help Nunavut fix those problems.

And that means Ottawa should make training a priority when devolution talks start, Patterson said.

Another issue that needs more action is reform of the food mail program, Patterson said.

“Our interest is seeing the program go back to its original purpose, providing affordable food,” he said.

Graeme Dargo, a Yellowknife consultant, submitted a sweeping review of the program earlier this year, recommending that Ottawa stop using Canada Post to run it and instead, work out direct, transparent subsidies with food retailers like the Northwest Co. and Arctic Co-operatives Ltd.

Officials with Indian and Northern Affairs Canada also produced reports on the food mail program, but Chuck Strahl, the northern affairs minister, has yet to announce a decision.

Patterson also said that he, and Nunavut MP Leona Aglukkaq, recently did some lobbying on behalf of Inuit corporations who are worried about the status of their contract for support and logistical work on North Warning System radar sites across the Arctic.

Since the mid-1990s, seven Inuit birthright corporations stretching from Labrador to the Northwest Territories have held that contract in a joint venture with a subsidiary of Atco Ltd., an Edmonton-based corporation that provides logistical support to defence installations, airports and mine sites around the world.

But the federal government is now taking “a different approach” to Inuit contracting, and that’s made the Nassittuq partners nervous about their chances of getting the contract after it’s renewed.

Patterson said he and Aglukkaq have already held one meeting with Chuck Strahl on the Nasittuq contract and have scheduled another for next week.

“We are going to stay on top of this issue,” Patterson said.