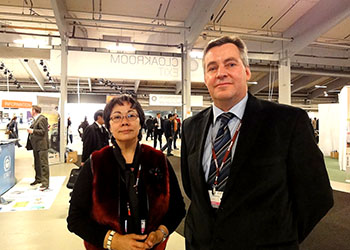 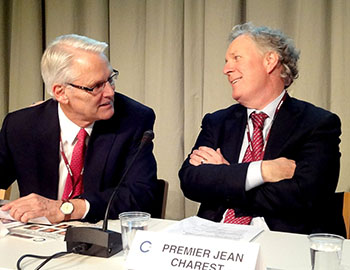 Gordon Campbell and Jean Charest, the premiers of British Columbia and Quebec, traded success stories about how they made headway in cutting emissions at a Dec. 15 United Nations climate change conference side event. (PHOTO BY JANE GEORGE)

COPENHAGEN — Nunavut has the natural resources to break its heavy dependence on fossil fuels, but none of the money that other Canadian jurisdictions have to develop non-polluting energy sources, Premier Eva Aariak said Dec. 15 at the COP15 climate change conference in Copenhagen.

Aariak and her environment minister Daniel Shewchuk, who arrived in Copenhagen Dec. 13, were among the 140 officials, delegates, members of non-governmental organizations and journalists who listened to the session, organized by the Climate Registry, a non-profit collaboration among North American states, provinces and territories.

The premiers and governors from the states of Washington and Wisconsin said it’s important to forge ahead with measures to cut emissions — no matter how lukewarm the support from national governments.

They vowed to continue their efforts, even if Dec. 18 doesn’t produce a global deal on climate change.

During a week filled with grim scientific predictions, the premiers of British Columbia, Quebec and Manitoba, described how they have forged ahead with emissions cuts at a Dec. 15 side event.

Gordon Campbell, the premier of B.C., attributed his province’s progress in cutting emissions to tax incentives for wind, solar and water power development.

By 2020, 90 per cent of B.C.’s energy will come from non-polluting, renewable resources, Campbell said.

The changeover to new technology also has led to more jobs, without their having to wait for the federal government to act.

“That’s happening because we won’t wait. If we can imagine it, we can do it,” Campbell said.

Jean Charest, premier of Quebec, also enthused about Quebec’s plans to ramp up hydroelectric power in the north and encourage residents to cut energy consumption.

Quebec has been “leading by default” in the drive to lower emissions and fight climate change because Canada’s federal government hasn’t moved forward, Charest said.

Manitoba also encourages measures to cut emissions from other sources, like dumps.

These are all impressive achievements and plans, about which Nunavut can only dream about now, Aariak admitted.

The challenge for Nunavut to lower its emissions is “daunting” due to a lack of infrastructure and money, although the GN continues to do research and development into wind, solar, tidal and hydro-electric power, Aariak said.

But there’s new urgency for getting these new clean energy sources in place “because climate change is affecting us now,” Aareak said.

Nunavut was the last of Canada’s three territories to join the registry last year.

All its members voluntarily measure, verify, and publicly report greenhouse gas emissions, after first establishing their emissions baseline, that is, the amount of emissions they produce now.

This figure is then used to document reductions.