Donor, recipient not on the same page 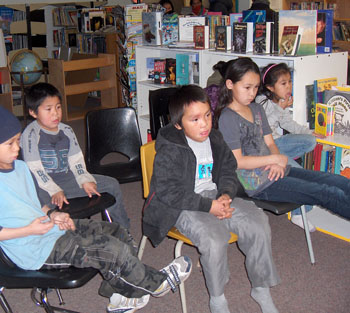 The Nunavut library system puts a strong emphasis on books aimed at children and young adults, and uses popular DVDs and video games that are based on books to lead people towards reading. (PHOTO COURTESY OF HOLLY BOIVIN)

For Arctic Bay librarian Hollie Boivin, getting a box of donated books at her library is “like Christmas all over again.”

“Except for the space problem,” she added ruefully.

And even in an Arctic library, where good indoor space is expensive and hard to come by, too many books and too little shelf space can be a big problem.

“For me, books are a treasure,” Boivin said. “But especially in such a limited space, I’ve had to loosen my hold on the books and let some of them go. It breaks my heart.”

She has run the Arctic Bay library since helping set it up eight years ago. after the Nanisivik mine closed and donated its library collection to the community.

And that makes an offer of free books from the Independent Authors and Illustrators of Canada a double-edged sword.

So the Guelph, Ont.-based IAIC is planning an end run around the Nunavut Library Services head office to get its members’ own books into the hands of Nunavut readers, along with as many other good books as it can collect.

The IAIC initiative started when Pat Mestern, an IAIC member, received an email from an avid reader in Nunavut.

“I was looking for your own book titles in our library and couldn’t find them but would really appreciate reading them,” the correspondent wrote. “Would you be so kind as to send copies as gifts to the library? I live on a limited income and can’t afford to purchase many books, so I use the library a lot.”

Mestern immediately sent copies of her books to the Nunavut library service, but said she received no acknowledgement of their arrival.

But when she contacted Knowling, he asked her not to send books, Mestern said.

So she emailed some of Nunavut’s libraries directly, and is arranging to send books straight to them.

“Space is limited but I could use some books,” one librarian replied, specifying religious, historical, science fiction and mysteries, plus books for children and teens.

While Mestern declined to identify specific libraries, because she said she didn’t want to get librarians in trouble with head office, an article in the Guelph Mercury noted some of the books would be going “as far away as Arctic Bay, which is approximately 3,300 km north of Guelph.”

For her part, Boivin noted that she had received an email from Mestern, and that she would of course accept any books that arrived on her doorstep.

For about eight years, Boivin has managed Ikpiarjuk Public Library, housed in a 30-by-30-foot room in Arctic Bay’s Inuujak School.

She also shares the room with the school’s library, making things even tighter.

Although there is no-one officially designated to look after the school collection, Boivin said she keeps an eye on things for both libraries, making sure the shelves are organized and keeping everything shipshape.

Mestern, who has never visited Nunavut, said she also heard from a church seeking books for its own lending library.

She suggested any church, school or youth group in Nunavut that needs books could contact here at mestern@can.rogers.com.

The IAIC collected books for Nunavut libraries at a mall in downtown Guelph, Ont. on Dec. 12, and received a good response, including mostly new books, purchased for donation, Mestern said.

Fifteen writers and illustrators from the organization put their own books up for sale at the book fair.

The IAIC will then send the books directly to some of Nunavut’s libraries, even after hearing a clear “no” from Ron Knowling, the head of Nunavut library services.

“We like to control our own collections,” Knowling explained in a telephone interview.

While he appreciates local donations, he said, where the librarian can look at the books as they come in and make a sensible selection, he also said bulk donations from far away can be a mixed blessing, or even a burden.

They land on your doorstep and many of them have to be thrown out, he said. They may be old, out of date, or in poor physical shape. And they may not be appropriate for the library readership.

For his part, Knowling doesn’t like the implication that NLS, which is funded by the the Department of Culture, Language, Elders and Youth, can’t afford to buy books for its libraries.

After a 40 per cent budget increase last year, Nunavut now spends about $60,000 a year on the purchase of library materials, he said, not counting periodicals or subscriptions to online databases, which are increasingly replacing reference book collections in library systems around the world.

That’s about $2 per capita, which is comparable to many jurisdictions in southern Canada, Knowling said.

Of course, Nunavut faces additional expenses in shipping the books to its libraries.

“The department is working hard to try to meet our needs,” he said, noting that CLEY also just made a special, one-time addition to the library budget at the end of this year that will nearly double the available funds this year.

In a territory with lower-than-average literacy, the NLS works hard to encourage reading.

Some strategies, Knowling said, include buying popular DVDs and video games, but also acquiring the books they were based on, to hook people in with the film or game, and then hopefully lead them to the book.

The Nunavut system also focuses on children’s and young adult books, and books related to the Arctic.

Nunavut runs functioning libraries only in the 11 larger communities, but this means 70 per cent of the population is directly served by a library.

Nunavut also runs a books-by-mail program for the 14 smaller communities. Anyone who wants to use that service may contact Sarah Sevoga at Nunavut library services in Baker Lake (867-793-3351).