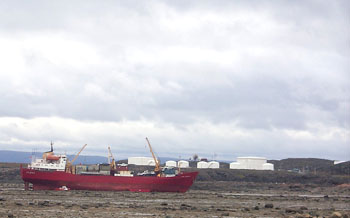 Seagoing cargo ships like this carry millions of tonnes of vital supplies to the Arctic every summer and without ship transportation, the global economy would grind to a halt. But fuel-guzzling cargo ships also contribute to climate change and the International Maritime Organization is looking at ways of encouraging the use of more energy-efficient vessels. (FILE PHOTO)

Shipping may be a more energy efficient transportation method than trucking, but shipping still emitted about a billion tonnes of greenhouse gas worldwide in 2007— equal to the emissions produced by 100 million motor vehicles.

This quantity of greenhouse gas emissions adds up to more than three per cent of all global emissions, and, if nothing changes, this amount could grow many times more by 2050.

Even under a scheme that sees the world trying to limit emissions so global temperatures rise by an average of two degrees Centigrade, shipping will account for nearly one-fifth of all the global emissions by 2050, according to a recent study on international shipping and emissions from the International Maritime Organization.

But it will be “difficult” to deliver any emission cuts when the world market is growing, said an IMO official speaking at a panel on shipping and greenhouse gas production at the Copenhagen climate change conference said.

That’s because as the global economy and the population grows, we can expect to see more shipping, not less.

Willing to up efficiency, the shipping industry doesn’t want to see any slow-down on its growth, despite its sizeable contribution to global warming.

In addition to carbon dioxide— the main greenhouse gas— ships also spew soot, sulphur and are known to leak refrigerants and oil, all of which have the potential to cause more damage in the Arctic than elsewhere.

Most shipping in the world is international— even in Canada’s Arctic where few ships are domestically flagged or registered.

Some of this growth in international shipping will be in the Arctic.

Ships are likely to start traveling over the North Pole from North America to Europe and Asia, as soon as ice conditions permit, according to scientists at the United States climate change conference in Copenhagen.

This past year already saw a record 23 transits of the Northwest Passage, compared to 17 in 2008.

Changes to the designs of ships, how fast they go, where they travel and what kind of fuel they use may increase their efficiency and reduce emissions by 25 to 75 per cent below today’s levels, says the IMO.

A mandatory energy efficiency ratings for new ships would be one way to increase the efficiency of new ships and lead to “green” ships in the future.

But there’s a problem.

Two-thirds of the shipping industry, which employs 1.23 people worldwide, is located in poor countries. There its 100,000 ships — many of which were made 30 years ago when no one worried about dirty exhaust — are the mainstay of the economy.

So, the shipping industry doesn’t want to see changes that will create any barriers to trade or see rich nations like Canada make expensive retrofits to their fleet while poorer countries continue to operate their aging, polluting ships as they do now.

One way to improve efficiency and lower greenhouse gas emissions may be to deliver more cargo using less dirty and lower quantities of fuel.

As a UN agency, the IMO’s role is to adopt legislation, while enforcement lies with the individual states.

Under whatever climate change agreement comes out of Copenhagen, the IMO wants to continue setting global regulations to control emissions from ships sailing internationally.

But these regulations on safety, security, traffic and environmental protection need to be approved globally because the IMO says it’s impossible to alter, mid-voyage, a ship’s design, construction, equipment, staffing levels or operational procedures so they meet standards in a port of arrival which differ from those in the port of departure.

“World trade would simply grind to a halt,” says the IMO.

The IMO says it wants to set regulations that are practical, transparent, fraud-free and easy to implement to up efficiency and lower emissions.

But some at the panel discussion in Copenhagen doubted this would be possible, noting many ships continue to flaunt other environmental regulations regarding sludge disposal.