In the Nunavut legislature last week 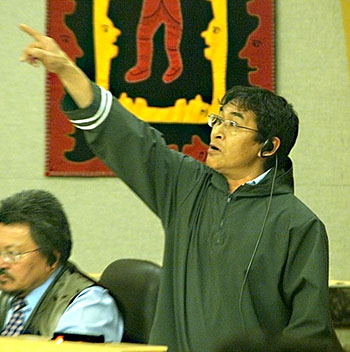 Adamee Komoartuk issued an apology last week for his behaviour during a drunken incident at the Baffin Large patient home in Ottawa last month. (PHOTO BY CHRIS WINDEYER)

Adamee Komoartok, the MLA for Pangnirtung, rose in the assembly last week to make an abject apology for his behaviour during a drunken visit to the Larga Baffin patient home in Ottawa last month.

“Although my behaviour was the result of intoxication, this is no excuse for what I did,” Komoartok said.

Although Komoartuk didn’t say exactly what he did during the visit, MLAs also voted, in a motion passed Nov. 27, to censure the Pangnirtung MLA’s behaviour.

Komoartuk also resigned as chair of the standing committee on economic development.

“I take full responsibility for my actions, and you and all members can be assured that I will accept the judgment of my colleagues in this matter without reservation,” Komoartuk said.

Enuk Pauloosie, the MLA for Nattilik, says he wants the Government of Nunavut to ban all of its employees from flying on Air Canada “to support our northern airlines.”

Pauloosie, along with South Baffin MLA Fred Schell, denounced the impending entry of Air Canada Jazz into the Iqaluit-Ottawa-Montreal, saying it threatens the northern airlines like First Air and Canadian North.

“When will this government act? We cannot afford to sit back and wait. The government needs to protect northerners. What are they going to be doing?” Pauloosie said.

Peter Taptuna, the transportation minister, said the GN will not act hastily and will wait until after they study the issue carefully.

“It’s complicated, a hugely complex issue, especially for the smaller communities and the Inuit-owned airlines. At this time, we don’t have all of the facts. We are not going to base any kind of decision on fears and incomplete information,” Taptuna said.

Taptuna did say the GN will meet with northern airlines to discuss the issue.

Critics of the Air Canada move say that by driving down ticket prices on the Iqaluit-Ottawa route, First Air and Canadian will be deprived of revenues they use to subsidize less profitable routes serving smaller communities.

Hunter Tootoo, the MLA for Iqaluit Centre, said in a member’s statement last week that MLAs and other residents should tell the federal government that its long-gun registry should be scrapped.

Tootoo said he received a political flyer in the mail recently with a question asking the recipient to check a box indicating if they want the long-gun registry scrapped.

“I’m clicking yes, the long gun registry should be scrapped by the federal government, and I will be sending it in to them,” Tootoo said.

Hunter Tootoo, the minister responsible for the Qulliq Energy Corp., fended off questions from Iqaluit West MLA Paul Okalik and Tununiq MLA James Arvaluk over some remarks they read in a leaked draft copy of the QEC’s Inuit employment plan.

Okalik went ballistic over a section of the report that said some Inuit employees of the power corporation are lacking in confidence and demanded that whoever wrote it be fired.

Tootoo responded by saying that this observation comes directly from talking to the Inuit employees themselves.

He also said the document is a draft and that no one in government has signed off on it.

Rate regulator to be beefed up

The Government of Nunavut introduced a bill last week that will expand the capacity of the territorial body that acts as a watchdog over electrical power rates, the Utility Rates Review Council.

Some amendments to the URCC act would expand the size of the council, create an executive director’s position, and give the council more latitude over deciding whether a rate issue is “major” or “minor.”

The amendments also clarify how and when information about rate applications should be released to the public.