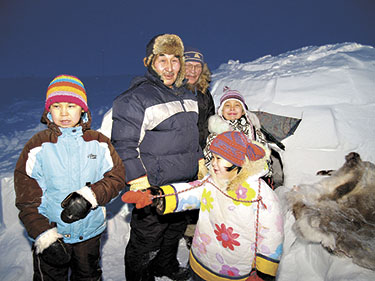 Gideon Taqaogak, centre, is one of the organizers of the Festival of the Return of the Sun. Here he stops by the igloo to visit friends. (PHOTO BY CHRIS WINDEYER) 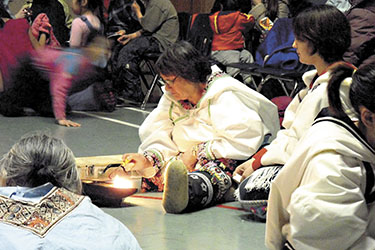 A woman tends to a qulliq during opening ceremonies for the Festival of the Return of the Sun in Igloolik Jan. 15. The qulliq is lit, extinguished and lit again to symbolize the return of the sun over the horizon. (PHOTO COURTESY OF SARAH MEDILL) 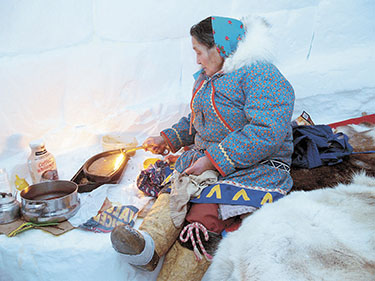 Tipporah Qaunaq tends a qulliq in an igloo Jan. 16. Qaunaq was there all day serving tea and country food to passers-by. (PHOTO BY CHRIS WINDEYER) 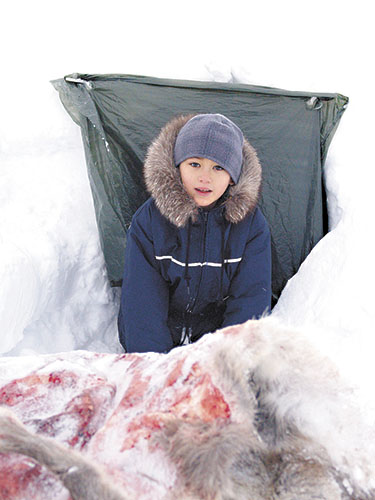 James Evaluarjuk, 9, crawls out of an igloo in Igloolik Jan. 17. (PHOTO BY CHRIS WINDEYER)

Despite the boiling tea and the burning seal oil, the smell of naptha overpowers everything else. The temperature inside is comfortably above zero and the igloos walls have developed a slick, icy crust.

Sunday is the quiet day on the schedule of the Festival of the Return of the Sun.

Qaunaq oversees the igloo as grandson Elmo, 11, and friend James Evaluarjuk, 9, hang out with, and do a little interpreting for, a visitor.

The igloo, on the edge of town near Igloolik’s signature inuksuit, serves as a sort of drop-in centre during the festival.

Qaunaq is taking care of the place, fashioning an inner door out of fabric to replace the one made from a garbage bag. The outer door is a wolf pelt.

There’s a language gap between Qaunaq and the visitor, but James, perhaps unfairly recruited, does his best to translate.

When Inuit still lived in igloos, Qaunaq said, they were happy to see the end of the dark season. The festival is a way to keep that tradition alive, she said.

For more than a month, the sun skirts just below the horizon here, offering a few hours of dim light.

High Arctic residents might say that while it’s nothing compared to their endless months of darkness, it’s still a good reason to throw a party.

To Leah Otak, who runs Igloolik’s oral history project, the return of the sun might be more significant than New Year’s.

“When I compare these two, [the return of the sun] is a much more meaningful celebration,” she said.

The current version of the festival dates back about 14 years, said Gideon Taqaogak, chair of the Inullariit Committee, which organizes the festival.

Traditionally, Otak said, Inuit would celebrate when the sun returned, but only if it was clear there’d be enough meat to make it to spring.

“When they had food and they had blubber to keep their light, that was a sign of success,” she said. “And when the light is coming back they were very happy that they can go hunting in the daylight where you can see far away.”

Today, the festival’s activities also serve as a good way to pass on traditional knowledge to young Iglulingmiut.

“It’s important for us to keep our traditions alive,” he said.

For nine-year-old James, who said he’s already come close to shooting a walrus, and who’s sporting a pair of kamiks he made himself, the festival is a great chance to learn from his elders.

But the return of the sun is also good news for James for another reason: he’s looking forward for the chance to “go outside more and be warm.”