“A repetitive cycle of crises and social degradation” 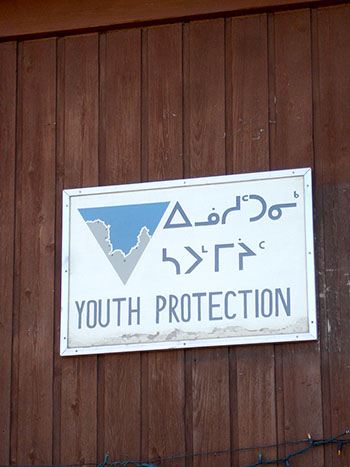 In reports to the Quebec government obtained by Nunatsiaq News, Nunavik youth protection workers say little has changed since the 2007 release of a damning report on the plight of children and youth in the region. They say that without more help from the government, the region will sink into “a repetitive cycle of crises and social degradation.” (FILE PHOTO) 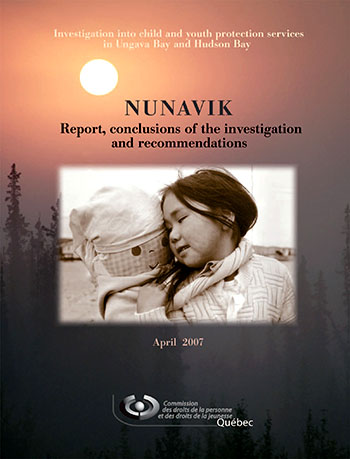 This report, published in 2007 by the Quebec human rights commission, concluded that the youth protection system in Nunavik was so dysfunctional, it violates the human rights of children and youth. In reports given to the Quebec government in 2008 and 2009, youth workers say little has changed.

KUUJJUAQ — Take too many people stuffed into cramped social housing units, too few trained social workers to fix the resulting problems — and it adds up to disastrous consequences for Nunavik children.

In just one two-week period, between June 21 and July 4, youth protection workers in the Hudson Bay coast region had to place 124 children into 73 different foster families for their own protection.

More than 400 children and youth in Nunavik, whose population is only about 11,000, are now under youth protection, many living in foster homes.

But finding good foster homes for children who need protection is still a big problem for youth protection officials in Nunavik, leading to hurried placements in foster families who are often non-Inuit or live in other communities.

“We had great problems trying to recruit foster families which would be stable and acceptable for our children and youth, even if we went on local radio. People in stable homes refuse to welcome children because of the lack of space in their houses and the lack of spaces in daycare,” a committee of health professionals said in a document obtained by Nunatsiaq News.

Numerous plans to improve conditions are doomed to fail, members of committee says.

And committee members say many Nunavik children remain at risk of neglect and abuse due to the combined impact of overcrowded housing and inadequate resources, despite repeated calls by the human rights commission for action on the continuing crisis in regional youth protection services.

And, the responsibility for this sad situation doesn’t lie solely with government: Nunavimmiut must re-affirm their pride and make decisions about what they can do to improve their living conditions, they say.

As it stands now, Nunavik’s communities are nosediving into a “heightened state of turmoil,” they say, and Nunavimmiut don’t want to seek jobs in youth protection services in any capacity.

Without more government help — and especially more money for social housing — the region risks “sinking into a repetitive cycle of crises and social degradation,” says a Dec. 2008 document.

“Single family housing units, shared by several family units and several generations are the norm and not the exception in Nunavik,” committee members said.

“They are also the centre of disagreements, conflict, violence and abuse of all sorts that can only have a negative impact of the development of children who live there.”

For their part, youth protection workers can barely cope, because they receive little support from communities.

Many Nunavimmiut see youth protection as part of the problem rather than a “force to bring about change.”

Youth protection workers, who come mainly from the South, also say they don’t receive enough benefits, housing or training to convince them to remain on the job.

The lack of youth protection workers and the high turnover rates leads to “volatile” situations, where there are no on-call lists or replacements to take over when a youth social worker is out of the community.

Youth social workers are generally on duty 24 hours a day, seven days a week for up to nine weeks and then take a month off. In many communities, their departure leaves a hole, which can be “impossible” and expensive to fill.

“The critical mass of employees isn’t enough” to cover the work, and the organization and services to the population are “naturally compromised,” says the Dec. 2008 the health board document, which talks about what happened in Salluit in July of 2008 when money from profit-sharing at the Xstrata’s Raglan nickel mine flowed into the community.

When the big cheques began to flow, the following things happened:

• employees stopped showing up for work at the Sapummivik youth rehabilitation facility for young offenders and other troubled youth;

• several troubled residents, who were there under court orders, ran away;

• water delivery and waste collection came to a halt;

The youth centre was froced to close down, sending its residents to the Montreal and Abitibi regions.

Sapummivik re-opened earlier this year for boys 12 to 18 but sources have told Nunatsiaq News they’re not sure “how long it will stay open.” The girls stayed in Montreal.

But facilities in southern Quebec are overcrowded and say they’re unwilling to take any more youth from Nunavik.

And youth group homes in Puvirnituq and Kuujjuaq for youth over 12 are also filled to capacity.

Because of all this, youth protection workers in Nunavik are now angry that last August’s visit to Nunavik by Lise Thériault, Quebec’s minister for social services, and Pierre Corbeil, the provincial minister responsible for aboriginal affairs and northern Quebec, didn’t produce any action on eight proposals for staff recruitment and retention.

These included demands for additional tax-free benefits, a northern bonus and better housing.

The lack of staff and infrastructure slows down progress positive measures such as “family house” projects in Salluit, Puvirnituq and Inukjuak, where families will get help for daily living problems.

Some workers accuse the Quebec government of dragging its feet because of the huge amount of money involved.

As for Nunavimmiut, the fear of reprisal stops also some of them from wanting to work for youth protection or even complaining publicly about bootleggers and drug dealers in communities who make a bad situation much worse, said one woman, who wished her region’s leaders would take a stronger stand against alcohol and drugs.

Minnie Grey, the chair of a regional partnership committee, charged with handling Nunavik organizations’ response to the human rights commission, says her group is trying to work with families and communities to make life safer for children.

But Grey also says drugs and alcohol get in the way.

Grey would like to see more action from leaders, a commitment to build more housing and better “camaraderie” between Inuit and the mainly francophone health professionals in the region.