Gifts a loved one can curl up with over the holiday 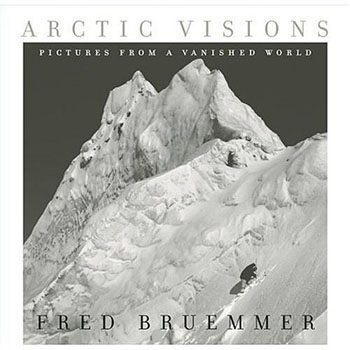 Arctic Visions by Fred Bruemmer might make an excellent gift for a loved one this Christmas.

For those of you who prefer to curl up with a good book on Christmas morning rather than try to figure out how the new TV set works or blast away at imaginary creatures on the new video game console, there’s a selection of just-published Nunavut and Arctic books that might be your cup of tea.

Perhaps the most spectacular of the lot is Paul Nicklen’s Polar Obsession.

Nicklen, who grew up on Baffin Island, is a biologist who has worked for numerous magazines, including National Geographic.

Polar Obsession is a collection of his photography from both the Arctic region and Antarctica. It’s a 160-page coffee table book featuring some of the most stunning nature photography around.

Nicklen also offers up commentary about his photos. He’s a good writer, but the spectacular photography, much of it shot underwater, is the main show.

Then there’s Arctic Visions: Pictures From a Vanished World by Fred Bruemmer.

Much like Nicklen, Bruemmer is fascinated with photographing the Arctic. From 1964 to 1995, Bruemmer visited and lived among Inuit.

This book is a collection of his black and white photos, plus his recollections, essays and commentary. Bruemmer is routinely cited as one of the most important photographers to catalogue life in the arctic and the book is worth a look.

If words, and not pictures, are more your thing then perhaps The Ice Passage by Brian Payton might be up your alley.

While there are no shortage of books out there about Sir John Franklin and his attempts to find the Northwest Passage, Payton’s book is different in that it’s about the crew of the Investigator, which was sent on a mission to find out what happened to Franklin and his crew.

It has some of the usual themes when writing about Arctic explorers — starvation, madness and bravery — but also has some insights from new journals never published before now.

To The End of the Earth by Tom Avery takes a look at Robert Peary, another famous and controversial Arctic explorer.

In 2005, Avery and his team sought to recreate Peary’s trip to the North Pole. Avery himself is familiar in arctic exploration as one of just a handful of people who have made it both poles on foot.

For a more recent look at Arctic exploration there is This Vanishing Land by Diane Whelan.

In 2007 the Canadian Forces and Canadian Rangers set off from Resolute with the mission of making it to Alert. Whelan joined the group and this book recounts her journey. It’s a trip that had its perils, what with her snowmobile catching on fire and her falling through a 20-foot deep crack in the ice.

If you like some celebrity mixed in with your tales of the arctic there is always Journey to the Edge of the World by Billy Connolly, a well-known comedian and actor.

In 2008, Connolly went on a 10-week trip from the Atlantic to the Pacific via the Northwest Passage. Connolly goes for the big stories in this book, with strange tales and odd characters, but with his sense of humour, he manages to make it all engaging.

For the policy wonks, there is Who Owns the Arctic by Michael Byers, a lawyer and leading expert on the arctic. He examines the issue of arctic sovereignty, who owns what and how disputes should be resolved.

Finally, if you want to read about a different part of the north, there is always Arctic Scientist, a biography of Mikhail Mikhailovich Ermolaev, one of the Soviet Union’s most prominent scientists in the 1920s and 1930s.

Despite his importance in the study of Arctic sciences, he was sent to a gulag for 10 years. Written by his son and translated into English for the first time, it provides an interesting insight into the way the Soviet Union treated its scientists.