Carnivore chef pursues call of the wild in Nunavik

“They really had some wonderful products.” 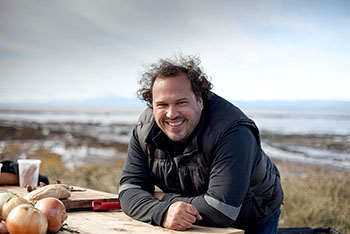 Star chef Martin Picard traded his Montreal kitchen for the tundra beyond Puvirnituq last month while filming an episode of his cooking show The Wild Chef. (COURTESY OF THE FOOD NETWORK)

What do you get when you offer country foods to a southern chef?

A carnivore’s culinary dream, according to Martin Picard.

The star chef was recently in Nunavik filming episodes for his televised cooking show, known to French-speaking viewers as Martin sur la Route and in English as “The Wild Chef.”

The culinary road series explores Québécois cuisine with a focus on preparing regional foods right from their source.

“It was a huge opportunity to go there, it was really an exclusive for us,” Picard said in a phone interview. “They really had some wonderful products.”

During a week in Puvirnituq, the meat-loving chef tasted most of the local fare, some that he was even able to gather himself scuba diving for sea urchins and mussels.

A professional chef since the 1990s, the wild chef admits he didn’t know much about the Inuit diet before his trip North. In a matter of days, however, he had created a fusion of old and new tastes.

A group of Puvirnituq hunting guides, including Paulusie Novalinga and his two sons Juani and Jean-Marie Beaulne, accompanied Picard and his filming crew during their stay.

The first filming day, guides caught a seal. Picard later used the fat as an ingredient in his mussel dish.

Later that week, Novalinga shared his family’s secret caribou oatmeal stew recipe with Picard. (“It was already famous,” Novalinga reasoned, “at least in my house.”)

“We did some great recipes,” Picard said, “a real mixture of southern and northern tastes.”

“In some cases, it was more of a coincidence,” Beaulne said. “He just added more flavour.”

Beaulne was fortunate enough to dine on Picard’s creations all week; his favourite was the herring — caught and fried on the spot.

The show’s head chef and seven crew members filmed all week to gather enough footage for both the French and English episodes.

It was unique to be able to film the show in Nunavik, Picard said, because it wasn’t just locally-produced foods, “les produits du terroir” that were new to him, an entire landscape and way of life.

“There was something really enjoyable about the whole experience,” he said. “They’re fortunate to have so much local product in the North.”

“If we could, we’d love to return,” Picard said, hinting at plans to film a future episode on cooking with caribou. “We all enjoyed it — it’s a really neat place.”

While Picard left with a taste for Northern cuisine, his new friends in Puvirnituq are looking forward to some southern dining. Beaulne and the rest of his family have been invited to dine at Picard’s prize-winning Montreal restaurant, Au Pied de Cochon.

It’s an experience that Beaulne is sure to appreciate after working so closely with one of the province’s best-known chefs.

Beaulne says the cooking show could help popularize the country food he grew up on — a scenario he’s comfortable with.

Picard is not the first master chef to take interest in the northern diet; Quebec chef and cooking instructor Jean-Paul Grappe has spent time cooking in the region and working as a consultant at the Kuujjuaq Inn.

Promoting local foods to visitors to the region is something the Nunavik Tourism Association would like to explore, said Allen Gordon, the association’s director, although he says there are still too many obstacles that prohibit the sale of country foods.

The “Wild Chef” launches its second season on the Food Network Jan. 8; the date of the Nunavik episode in English has yet to be scheduled.

Here are two of Picard’s Nunavik recipes, courtesy of the Food Network:

Brown the cubes of lard in a pan. Then brown the goose meat in the lard. Salt and set aside.

Lightly brown the onions. Salt and set aside.

Deglaze the pot with the red wine. Add elderberry. Set aside.

Pour in the red wine, the wine used to deglaze the pan, and the elderberry. Add pepper.

Close the jar tightly. Place in a cauldron full of water. Bring to boil and cook for one hour.

Prepare the meat, by marinating the hare meat in a red wine and vegetable mixture, for a minimum of 12 hours.

Cook the pieces of hare in a very hot cast iron pot with butter and olive oil.

During cooking, sprinkle flour over the meat. Pour the vegetable marinade into the pot, and add red wine until the meat is submerged.

Trimmings and Sauce:
Cook the lardons in a very hot pan. Add the mushrooms and set aside.

In another pan, cook the onions and carrots with water and maple syrup. Reduce till nearly dry.

Glaze the vegetables. Set aside.

Remove the vegetables from the pot and strain out the liquid.

In a bowl, mix together the blood, cream and cognac. Add the cooking liquid, still hot but not boiling, and stir constantly.

Put the cooked hare pieces, the vegetables, lardons and sauce in the pot. Mix well. The sauce should cover all of the pieces of meat.
Garnish with butter, toasted croutons and minced parsley.