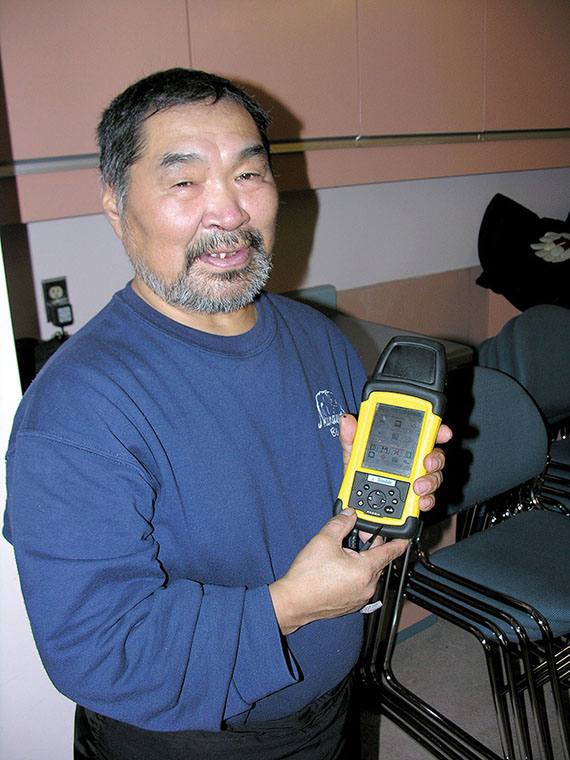 David Iqaqrialu of Clyde River displays the Igliniit system with one of its wildlife menus. Shown are the icons for seal, narwhal, fish, fox, polar bear and walrus. (PHOTO COURTESY OF SHARI GEARHEARD)

A project that promises to revolutionize the way traditional knowledge is gathered and used across Nunavut’s vast expanse has run into a problem all too familiar to software entrepreneurs everywhere — it’s running out of cash.

The Igliniit Project has spent two years testing and refining a computer program for hunters to log what they see and do on while out on the land.

But as the money from the International Polar Year’s research winds down, Igliniit looks to new sources to continue its work.

Since Igliniit’s inception five years ago it has spent around $260,000 in technology, travel and fees.

Shari Gearheard, one of the project’s coordinators, said it’s not clear how much more the project will need. That will depend on what new applications her group chooses to develop.

She was looking to scientists’ groups and the departments of the Government of Nunavut for fresh funding.

Igliniit has produced a program for a pocket computer to record weather data and hunters’ observations while on the land.

Using a stylus on the touch-screen, hunters can record what they encounter while hunting or traveling.

Igniniit’s coordinators presented their work in Iqaluit on Jan. 27 to a full house at Nunavut Arctic College and Unikkaarvik Visitors Centre.

The machine has icons for a variety of Arctic animals, as well as weather conditions, ice conditions, and even garbage, all though a pictographic interface in both English and Inuktitut syllabics.

If it’s an animal, the hunter can record if he simply saw it or shot it.

As a hunter taps the icons of what he sees, the machine records the time and the location of the sighting.

Although the computer has GPS capability, it’s only for recording locations, not navigation. Hunters can do that on their own, Gearheard explained.

The machine has an external weather sensor, which can be mounted on a snow machine or dog sled. The sensor takes readings of air pressure, humidity and temperature every 30 seconds.

The weather data combined with the hunters’ observations has the potential to produce an enormous amount of raw data on areas of the Arctic seldom visited by researchers.

Gearheard said she hoped every hunters and trappers organization in Nunavut would consider using the Igliniit system to document their land.

“The more you have eyes out there, the more you can share information,” she said.

There have been a few bugs to work out. The computer doesn’t work well in extreme cold, but the group has found an insulated sleeve to cover the unit and protect it.

A priority was to design a way to connect the computer to a snow machine so it would not run out of power. That required durable cables capable of handling the cold and rough travel.

David Iqaqrialu was one of the hunters involved in field-testing the system, taking it on trips from Clyde River to Arctic Bay and Igloolik.

He presented maps overlaid with dozens of icons representing input from Jayko Enuaraq, the hunter with the computer at the time.

Iqaqrialu said the information gathered could be useful in teaching traditional knowledge to youth, as well as for scientists who don’t visit Nunavut in the middle of winter.

Gearheard pointed to the variety of potential applications for the information gathered: environmental monitoring, land use planning, wildlife and harvest studies, search and rescue and ice mapping.

For example, when a new mining exploration project conducts community consultations, local residents help develop maps to show where are the hunting grounds and fishing areas and other resources on the land.

Igliniit’s work would have such maps ready to go.

As an added bonus, the engineering students who designed the computer program installed a few video games like Solitaire.

These proved unexpectedly popular among hunters while waiting out bad weather.

The seven-year-old daughter of one hunter even figured out how to put music on the units, resulting in a rash of music sharing among the program’s participants.