GN expects to spend only $111.4 million on infrastructure and equipment 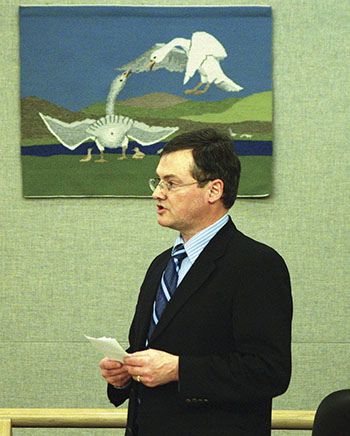 The Government of Nunavut expects to spend only $111.4 million on buildings, equipment and infrastructure next year, about half the amount projected for the current fiscal year.

Keith Peterson, the Nunavut finance minister, tabled the GN’s capital spending estimates for first and second reading Nov. 24. They cover the period between April 1, 2010 and March 31, 2011.

These include a doubling of money available for homeownership programs, airport improvements around the territory, municipal infrastructure, staff housing for school employees in Cape Dorset, Qikiqtarjuaq and Sanikiluaq, and the setting aside of $7 million for a future Nunavut Heritage Centre.

Other highlights of next year’s capital budget include:

• only $12.9 million for the Department of Education, much of which will be spent on school additions and next year’s share of spending on new schools for Cape Dorset, Igloolik and Repulse Bay, as well as $3.5 million on the multi-year renovation of Iqaluit’s Inuksuk High School;

• $16.2 million on a new territorial jail in Rankin Inlet, a multi-year project expected to cost about $40 million in total;

• $5.4 million for a new community hall in Igloolik;

• doubling of money for homeownership programs, from $2 million this year to $4 million next year.

In the current fiscal year, which started April 1, 2009, the GN is on track to spend roughly $222.8 million on capital projects, double what’s projected for the coming year.

That figure stood at only $120.7 million earlier this year when Peterson introduced the GN’s 2009-10 budget, but has since been plumped by big contributions from the federal government’s anti-recession stimulus plan.

Spending on new social housing through the Nunavut Housing Trust isn’t listed in the capital budget. That’s because it’s accounted for in a separate pot of money that holds the $300 million that the federal government has so far contributed for social housing in Nunavut.

If that spending is added on, it’s likely that total capital spending by governments in Nunavut this year will exceed $300 million.

The Department of Community and Government Services alone is expected to spend $61.6 million this fiscal year.

But if this next year’s number’s hold, that will drop to $35.9 million, which will still leave the CGS department as the GN’s biggest spender on capital projects next year, accounting for about one-third of the total.

He said that’s partly accounted for by $19.2 million in spending that MLAs approved in June as part of the GN’s contribution to various federal-territorial shared-cost infrastructure projects.

He also said spending on health care through the Department of Health and Social Services continues to outstrip the GN’s spending estimates.

To fix that, he introduced Bill 9, a supplementary spending act that would give the health department another $16.6 million this fiscal year.

“One of the major cost drivers in the government’s budget continues to be health care expenditures,” Peterson told MLAs.

And he said the GN wants to make a deal under which they would buy the Arviat health centre, with a proposed $581,000 slated for that purpose in one of the money bills tabled this week.

The Arviat health centre was built and leased back to the GN by a local development corporation that has run into financial problems.