Inuit leaders at odds over oil and gas emissions 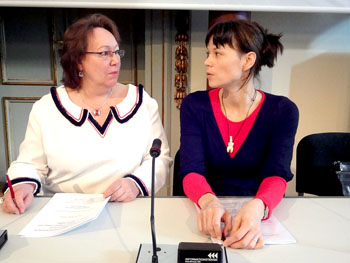 Environmental activist Sheila Watt-Cloutier and Greenland’s social affairs minister, Maliina Abelsen, don’t see eye-to-eye on the need for Inuit to limit their contribution to rising levels of climate-warming greenhouse gas emissions. The pair appeared as panelists at an Indigenous Peoples Day event during the COP15 conference (PHOTO BY JANE GEORGE)

COPENHAGEN — A big rift has emerged among Inuit leaders attending the COP15 climate change conference in Copenhagen over greenhouse gas emissions from northern oil and gas development and other industrial projects.

Stotts is from Barrow, Alaska, where the North Slope Borough, a regional government, rakes in most of its annual budget through tax revenues from companies like BP, ConocoPhilips and ExxonMobil.

And Inupiat corporations earn even more by providing services to the oil industry. The Inupiat are also enthusiastic proponents of oil drilling in the Alaska National Wildlife Refuge.

“It just doesn’t seem right for Inuit, who have gotten themselves to this point where they can develop and make better communities, without having access to the money that they make from these industries,” Stotts said in the radio interview.

But that’s not the official position of the ICC, Aqqaluk Lynge, the ICC vice-chair for Greenland, said Dec. 12.

ICC supports cuts to the emissions the are heating up the Arctic because “we are the ones who have been hit hardest by climate change,” says Lynge, who attributed Stotts’ recorded comments to a “misunderstanding.”

Lynge says it’s not fair that Inuit have paid a “high price” for the warming caused by people living far to the south.

But he says that doesn’t mean ICC advocates the development of gas and oil or other emission-producing industries as a way to improve social and economic conditions among Inuit.

Lynge says Inuit will “lose ourselves if we adapt in the wrong ways, if we plunge headlong into change without relying on the traditional culture and knowledge that we, as an indigenous people, have always depended on.”

Lynge’s position is shared by Sheila Watt-Cloutier, an environmental and human rights activist and a former president of ICC.

Watt-Cloutier was the most visible spokesperson for Inuit during the first week of the United Nations climate change conference in Copenhagen.

She said Inuit need to stand their “moral ground” in the debate around climate change and not support unsustainable, polluting industries, or else they will undermine their credibility, their influence and their future.

“As we call on the world to change its ecologically degrading practices, we must not accept those practices at home no matter how desperate our need for jobs or economic development,” Watt-Cloutier said during a Dec. 12 panel presentation at Indigenous Peoples Day at Copenhagen’s National Museum.

“Economic gain must not override the existence and well-being of a whole people whose way of life is already being severely taxed.”

Watt-Cloutier acknowledged that “the very cause of much of global warming, sadly has now become appealing to us, adding only to the confusion of the issue.”

The lack of consensus among Inuit about the need to curb greenhouse gas emissions became obvious when panelist Maliina Abelsen, Greenland’s social affairs minister, said her government wants to increase emissions from money-making projects, not cut them.

Greenland “must increase its levels of C02 emissions” to continue its economic development, Abelsen said, through more mines, a huge aluminum smelter, and oil and gas development.

“We need to accept that if Greenland is to become economically independent, we need to industrialize. For that reason, we can’t commit to reductions for both mineral industries and energy-intensive industries,” Kleist told Greenland’s Sermitsiaq newspaper recently.

Greenland may sign on to a new global climate agreement, but only for “non-commercial” emissions.

Greenland’s carbon emissions have risen by 4.3 per cent since the 1990s.

Its government is now ready to cut emissions by five per cent from 2007 levels before 2020 by developing hydro-electric power, increasing efficiency within the fishing industry and renovating existing buildings.

But the Greenland government has no interest in cutting plans to increase gas and oil production, boost mining and build an aluminum smelter.

Despite measures that reduce the emissions produced by smelters, Greenland’s proposed aluminum smelter could increase its emissions by as much as 75 per cent.

ICC supports emission cuts that would keep the global temperature increase to two degrees C by 2100.

ICC wants Inuit communities to benefit from the billion-dollar climate change adaptation fund, expected to be part of a new global plan on climate change.

And ICC also wants an assistance fund for communities damaged by climate change.

ICC’s goals are largely supported by indigenous negotiators who are attending the COP15 talks this week from various countries.

Indigenous peoples, such as Inuit, must strengthen their capacity to adapt to climate change and convince the world that their traditional, low-emission-producing lifestyle is an example to follow, says Vicky Tauli-Corpuz, the chair of the UN’s Permanent Forum on Indigenous Issues, and a member of the official negotiating team for the Philippines.

Indigenous negotiators like Tauli-Corpuz have want recognition of the rights of indigenous peoples, human rights and traditional indigenous knowledge included in the seven-page “shared vision” agreement that world leaders are expected to endorse Dec. 18.