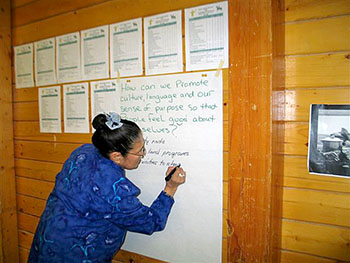 More than 80 people met in Cambridge Bay Nov. 24 to discuss the state of their community’s wellness and come up with ways to improve conditions. (PHOTO COURTESY OF S. EHALOAK)

More on-the-land camps and increased support for the homeless are among the ideas on how improve community wellness proposed at a special Nov. 24 town meeting in Cambridge Bay.

Posters and poems about wellness drawn by students in the community were affixed to the walls of the Luke Novoligak community centre.

Youth at the Nov. 24 meeting, which drew about 80 people, also came out strongly in favor of measures to improve the quality of life in Cambridge Bay.

A teenage girl, Azalea Atienza, wept as she told those at the wellness gathering how the social problems caused by drugs, alcohol and family violence affect her friends.

And homelessness is an additional burden some face, said Cassandra Evaluardjuk, a recent graduate of Kiilinik High School, who is handicapped due to a snowmobile collision— and now without a home to call her own.

Other speakers spoke out in favor of the creation of an alcohol education committee in early 2011, when Cambridge Bay can hold another liquor plebiscite, and for more programs at the hamlet’s wellness centre.

But the wellness centre scrapes by mainly on a patchwork of project money and donations.

That’s a situation that definitely should change, said Sharon Ehaloak, the hamlet councillor who chairs the community wellness committee.

Ehaloak said Nunavut’s elected officials are “negating their responsibilities” by not finding core funding for the women’s shelter in Cambridge Bay or the food bank that helps feed more than 60 families in the community— both of which fall under the hamlet’s cash-poor wellness centre.

Those at the Nov. 24 meeting, which was organized by the hamlet’s wellness committee, broke up in groups to consider six questions:

Practical suggestions stemming from group discussions included training sessions for elders so they would be better equipped to offer counseling to others in the community.

After all the various group responses to the six questions were written down, participants received stickers to paste them near the points which they thought were the top issues to deal with.

The hamlet’s wellness committee will table a report on the meeting to the new hamlet mayor and council members, who will be elected Dec. 14.

Ehaloak said she hopes the new town leadership will continue to see how Cambridge Bay can work on wellness.

The Nov. 24 meeting was for her a “powerful” start.

Ehaloak, whose council term is not up for election, said another community wellness meeting will likely take place early in 2010.