For Inuit, dying begins at birth 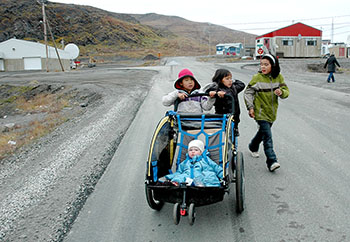 In a recent study, Nunavik had the highest infant death rate out of the country’s four Inuit regions. (FILE PHOTO)

KANGIQSUJUAQ — Inuit infants die at a rate three times higher than babies in the rest of the country, according to a new study published in the Canadian Medical Association Journal this week.

The study looked at births in Canada’s four Inuit-inhabited regions — Nunavut, Nunavik, Nunatsiavut and Inuvialuit — over a 10-year period.

University of Montreal researcher Dr. Zhong-Cheng Luo said socio-economic factors play a role in infant mortality — defined as death in the first year of life — and Inuit regions are no exception.

“In general, we need more efforts to improve prenatal care in Inuit regions,” he said. “Even when we compare more recent data, we don’t see any clear… improvement.”

Researchers collected data from over four million births between 1990 and 2000. They found the four Inuit-inhabited regions experienced an average of 16.2 deaths per 1,000 live births, well over three times the Canadian average of 4.6 deaths.

About 10 per cent of the births in the Inuit regions were to non-Inuit women.

But the risk ratios for infant death changed little when the comparison was restricted to other rural areas of Canada.

In 2001, a government of Quebec study found that the infant mortality in Nunavik registered at four times higher than the rest of Quebec.

The same study also found the pregnancy rate for adolescents in Nunavik was more than four times higher than the rest of the province — not unlike the ratio between Inuit regions and the rest of Canada.

“Newborns here are being born in relatively good shape when we look at their weight and health status at delivery,” Déry said. “But during the first year of life, there is a deterioration.”

Déry said that many infants are being hospitalized in their first year of life, many for respiratory problems.

Pre- and post-natal exposure to alcohol, drugs and smoking could be a factor, Déry said, which is only worsened by overcrowding in the region’s housing.

But many of these infant deaths can be prevented, he said.

Maternal smoking, a big risk factor for infection, is more significant among Inuit women than women in the rest of Canada.

Anti-smoking programs, as well as those to promote breastfeeding are strongly recommended, concluded the study.

The study also suggests educating mothers to place their babies on their backs for sleeping to avoid crib deaths.

“A lot has been put into place since [the study’s data was collected],” Déry said. “Several programs have been developed at the school and community level to inform pregnant women of the risks.”

In addition to those programs, Déry pointed out that midwifery services are now offered in three Hudson Bay coast communities in Nunavik, while the same services are beginning to take root on the Ungava coast.

This means women receive care from early pregnancy to the post-partum period without having to fly out of their communities.

View the complete study Birth outcomes in the Inuit-inhabited areas of Canada at www.cmaj.ca.