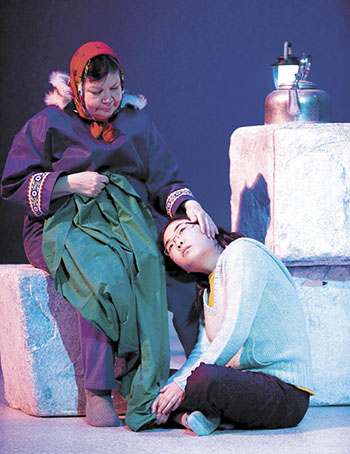 A generations-old Nunavik tradition is now entertaining and educating young audiences in Edmonton.

The Edmonton-based theatre company, The Cookie, has set the stage to tell an Inuit tale of gathering mussels under the frozen sea cap.

Launched last March for a short run, Beneath the Ice is the story of a young boy who visits a village along the Hudson Strait and learns about their special winter harvest.

Thanks to a positive response to the performance, the play’s producer and director Tracy Carroll plans to revamp the production and take it on the road.

“It still feels unfinished,” Carroll said. “We’ve done a lot of development and research and I want to share this with more people.”

Beneath the Ice is set in Kangiqsujuaq, one of the only places in the country where locals harvest mussels or uviluk in the winter months by cutting a hole through the sea ice and picking the seafood delicacy at low tide.

The winter harvest has been practiced for many generations, according to living memory.

Carroll’s creative partner, filmmaker and shadow puppeteer Eva Colmers, used to read the book to her children years ago. The story stuck with Colmers until she decided to adapt the story to the stage.

Carroll and Colmers both travelled to Kangiqsujuaq in January 2009 to research the story, on a Canada Council for the Arts grant.

Although she was unable to visit underneath the sea cap, with the help of local stories, Carroll could piece together the elements of the winter mussel harvest.

“The tricky part was the timing because you have to go under the full moon and at a particular time of the winter,” Carroll said.

Equipped with a sound recorder, Carroll was able to capture the audio from her trip such as the sound of cracking ice, dogs barking and a throat singing performance.

The set, costume design and lighting were all inspired by Carroll’s visit to Nunavik.

“Being there really helped a huge amount with this play,” Carroll said. “We wanted it to be authentic so (the trip) really solidified a lot of things.”

Beneath the Ice varies from the book it was based on. In the stage adaptation, a 14-year-old boy travels to Kangiqsujuaq with his mother, a researcher.

There he stays with an Inuit family who introduces him to winter mussel picking, and eventually rescue him when he ventures under the ice on his own.

“Some kids can’t believe that it’s real,” Carroll said. “They wonder what part of the play was real and what was fiction.”

Now, Carroll is hoping to revamp the play and begin touring it through Edmonton’s schools and beyond. She thinks the play has something to teach primary schoolchildren about the country’s geography.

“I’m so happy to learn about a part of Canada I didn’t know and I would love to share that with children,” she said. “And teachers love the fact that they can apply this to the classroom.”

Beneath the Ice would also make a good fit with Edmonton’s annual Ice on White festival, Carroll said.

She hopes to have the show back on stage in early 2011.