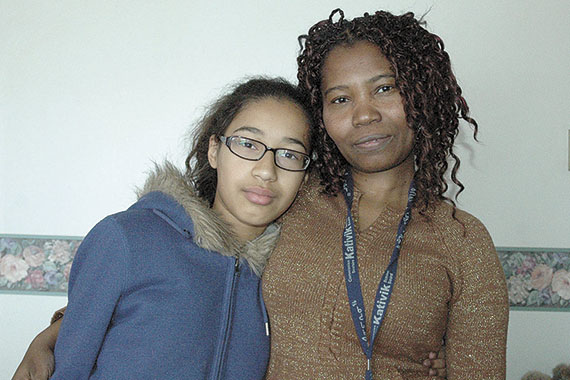 KANIGQISUJUAQ — Following last week’s devastating earthquake in Haiti, two teachers in Kangiqsujuaq are thankful for any good news that could come out of a disaster.

Although it took days, Marie-Rode Durand and Nancy Pierre-Jérôme finally got the news they were waiting for — their families had survived.

Special education teacher Durand had only just moved to Nunavik from Ontario earlier this month when news of the earthquake struck.

Still waiting to have her home phone connected, Durand and her daughter had to wait two days before they had any contact with family.

Durand found herself watching the news and trying to see people she knew from the images on television.

All of Durand’s immediate family lives in and around the Haitian capital and almost miraculously, all came through the earthquake relatively unharmed.

“All of their homes collapsed and they’re living in the streets,” Durand said. “But they’re alive.”

Durand, born and raised in Haiti, moved to Canada in 1993. She was last there in 2004 as part of an effort to build a library in Cite Soleil.

Now she knows it will be a while before she sees her loved ones again.

“It’s just one catastrophe after another,” she said. “Haiti is not prepared to handle natural disasters, they’re just not equipped.”

Nancy Pierre-Jérôme, another Arsaniq school teacher, is trying to deal with her feelings of helplessness following the disaster.

Although she was born and raised in Quebec, both her parents emigrated from Haiti and she still has family there.

Pierre-Jérôme is already planning a fund-raiser at the Kangiqsujuaq Inn in February, where proceeds will go to Canadian Red Cross relief efforts.

“We want to organize a fundraising dinner at the local inn around Valentine’s Day,” she said. “We’re going to put up some Haitian decorations and re-establish our love affair with that country.”

Pierre-Jérôme had an aunt and uncle from Montreal staying in Port-au-Prince when the earthquake hit last week.

It took three days for family in Haiti to make contact with her family in Montreal to let them know they were alive and well. Her relatives flew back to Quebec over the weekend on a Canadian Hercules aircraft.

“It was a lot of anxiety not knowing,” she said. “I feel so far away living here, my hands are tied.”

The French teacher hopes to travel to Haiti this summer to volunteer with some of the reconstruction of the country’s capital.

“We need to think what the country needs over the long-term to help rebuild and whether it’s in a school or elsewhere, I want to help,” said Pierre-Jérôme. “As a second generation Haitian, I feel the need to return to those roots. I don’t know the Haiti that my parents knew.”