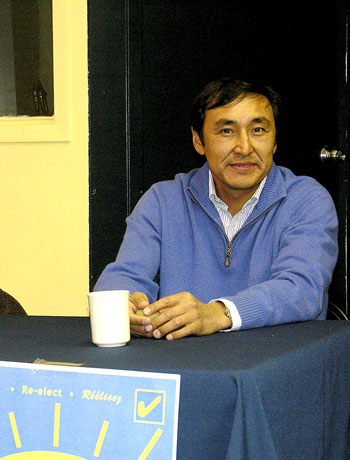 Pickell issued the ruling in a 22-page report he wrote in response to a complaint filed Oct. 30, 2008 by Iqaluit Centre MLA Hunter Tootoo. The report, dated Oct. 23, was tabled Nov. 26 in the legislative assembly.

Nunavut MLAs are to vote Nov. 30 on whether to accept or reject the report.

Tootoo’s complaint alleged that, in letters signed by Okalik’s financial agent, Nadia Ciccone, Okalik sought donations from deputy ministers at a time when, as premier, he held the power to hire and fire deputy ministers or give or withhold their annual performance bonuses.

“I talked to some individuals who were uncomfortable when they received that letter. They felt intimidated by it… I don’t believe any employee should be put in a position like that where they’re asked to contribute any campaign dollars or anything… by the person that has ultimate authority over their employment,” Tootoo said in an interview Nov. 27.

As is normal, during last year’s campaign for the Oct. 27 territorial election, Okalik continued to hold the Nunavut premier’s job.

The premier and members of cabinet always hold their positions until after newly-elected MLAs, following an election campaign, are able to elect or re-elect a premier and cabinet.

The integrity commmissioner noted that each fundraising letter that Okalik’s campaign sent to deputy ministers was tailored so that if a particular deputy minister went public with the letter, they could be identified.

In an affidavit sent to Pickell, Ciccone said Okalik did not suggest the names of any deputy minister who might be approached for money and that she did not know of the rules or procedures for “the hiring or pay of any Deputy Minister.”

But Pickell was skeptical of this explanation.

“If everything that Nadia Ciccone says is true, why were the letters that went to the Deputy Ministers tailored so that if any Deputy Minister went public with the letter at least Ms. Ciccone would know who it was?” Pickell said his report.

And Pickell went on to say that “a sitting premier should not solicit campaign money from any deputy minister.”

That’s because unlike any other candidate for MLA, Okalik retained the power to terminate or reward any deputy minister during the election campaign.

“I do not think that the public would tolerate one candidate in an election being able to solicit money from individuals over whom that candidate has the final say as to whether those individuals have a job and how much they earn,” Pickell said in his report.

In his conclusions, Pickell found that Okalik did not violate Section 10 of the act, which prohibits MLAs from using their public office to further their private interests, saying the fundraising effort was intended to advance a different thing: his political interests.

But after a lengthy discussion of the facts and legal issues that apply to Tootoo’s complaint, Pickell did conclude the following:

“As I have already stated in this Report, Mr. Okalik did not contravene section 10 of the Act.

But by allowing his Re-Election Campaign Team to send fundraising letters to Deputy Ministers in the Government of Nunavut:

1. Mr. Okalik did not arrange his private affairs in such a manner as to maintain public confidence in his integrity and impartiality, and thereby contravened section 4(a) of the Act.

2. Mr. Okalik did not refrain from accepting a benefit which might erode public confidence in his integrity and impartiality, and thereby contravened section 4(b) of the Act.

3. Mr. Okalik did not act in a manner that bears the closest public scrutiny, and thereby contravened section 4(b) of the Act.”

The Nunavut legislative assembly must now accept or reject the report in its entirety.

If MLAs accept it, Pickell says the following must happen:

• Okalik shall be reprimanded by MLAs;

• Okalik must acknowledge his wrongful conduct and apologize to MLAs, his constituents and all Nunavummiut;

• If Okalik fails to perform the above obligations within five days of the assembly accepting them, he should be suspended from his seat without pay until he does perform them.

For his part, Okalik appears unrepentant.

“Quite frankly, I don’t really care,” Okalik said in response to a reporter’s question about Pickell’s report.

Okalik said he didn’t violate the Elections Act, and that if this happened in the South, he wouldn’t be in a conflict.

“Because I’m in Nunavut, I’m in a conflict,” Okalik said.

But he also said he doesn’t want to prejudge MLAs’ consideration of the matter.

“It’s up to the House. I can’t prejudge what they’ll do and I’ll do whatever’s asked of me,” Okalik said.

Tootoo, however, didn’t show much sympathy for Okalik’s position.

“It’s called an Integrity Act for a reason and if he’s breached it, if he doesn’t care about the integrity of the institution and the legislation, I think that says a lot,” Tootoo said.

• Phoebe Hainnu, who donated $750 to Okalik’s campaign. At the time, Hainnu served as deputy minister of culture, language, elders and youth. She still holds that job.

Right now, the territorial public service act allows deputy ministers to make campaign donations, but they may not engage in most other forms of political activity.

The Nunavut Election Act also allows deputy ministers to make election contributions, but Pickell suggested in his report that MLAs may wish to tighten up this and other legislative provisions.