“There’s no clear answer to what (the result) is legally.” 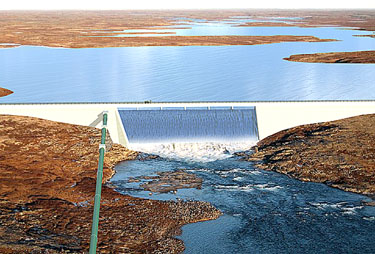 An architect’s rendering shows what the proposed Innavik hydroelectric project near Inukjuak would look like if the 7.5 MW project goes ahead as planned. (COURTESY OF PITUVIK LANDHOLDING CORP.)

People in Inukjuak have voted strongly in favour of constructing a hydroelectric plant to power their community.

During the referendum held March 23, 24, and 25, 83 per cent of those who cast ballots said yes to moving ahead towards construction of the small dam and reservoir on the Inukjuak River.

But voter turnout fell just shy of the 75 per cent that project leaders said was required to give the hydro dam a green light.

Only 71.6 per cent of eligible voters cast ballots, leaving the future of the project up in the air.

Last Friday, Pituvik Landholding Corp. president Eric Atagotaaluk went on the local FM radio station and said the referendum results were a clear mandate to go ahead with construction.

But this week, landholding corporation directors were expected to go back on the air to present the results and gauge the community’s response.

“They’ll go public to re-present this and answer any queries the public has,” said Mike Carroll, general manager of the Pituvik Landholding Corp.

“The yes and no results indicate there was a clear majority,” Carroll said. “But there’s no clear answer to what [the result] is legally.”

“[Landholding directors] felt comfortable targeting 75 per cent and it didn’t seem to materialize.”

If the project, dubbed Innavik, goes ahead, the $67.5-million hydro plant would generate about 7.5 megawatts of electricity.

A feasibility study showed Innavik would be able to meet the electricity and heating needs of Inukjuak, population 1,200, for at least 20 years.

The community entered into debate over the project in the weeks leading up to the vote, with proponents saying Innavik will create jobs in a community with the highest unemployment rate in Nunavik. Opponents say they’re concerned about how the dam will impact water quality.