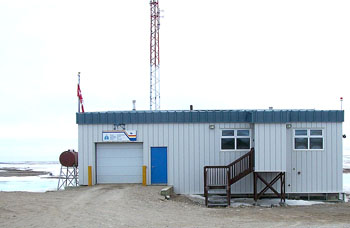 RCMP in Gjoa Haven say they’re chronically under-staffed because the detachment only has two full-time members to look after growing levels of alcohol-related crime in this “dry” community of 1,100. (PHOTO COURTESY OF THE RCMP)

The Government of Nunavut likely faces bigger bills for policing in the future, as many community detachments in the territory cry out for more permanent members.

That’s the message from Iqaluit where a recent analysis of the city’s population growth and the local detachment’s workload showed a need for more RCMP members.

And it’s also the plea made by the territory’s smaller detachments, like the RCMP in Gjoa Haven, where the two regular members struggle to keep up with a grueling workload.

For the moment, Gjoa Haven has one “relief” member to help out — but this member’s continued presence in the community is far from guaranteed.

But Gjoa Haven needs that third member all the time, Marshall said.

Without the presence of that relief member, Gjoa Haven’s two RCMP members would endure five regular eight-hour shifts during the week, followed by on-call duties on nights and weekends.

That’s the 24-7 weekly schedule Marshall and the other member in Gjoa Haven juggled until the relief member came in to help.

“Having a third member here enables us to do more proactive work, patrol more, to be involved in the community more, to enable the constables here to get a couple nights off from not being on call, so that we can catch up on our sleep,” Marshall said.

The result is that his detachment’s members aren’t “as stressed, as burnt out, and that way, we can tackle any problem or challenge that arises tomorrow.”

At one time, a two-member detachment may have been enough to police Gjoa Haven, but now it’s not.

The RCMP’s workload there has risen by more than 50 per cent during the two years Marshall has been in the community — a “big increase,” he said.

And these numbers just represent a portion of the work involved for the RCMP.

By the end of this year, the numbers for complaints, service calls and prisoners are expected to reach or surpass those for 2009, Marshall said.

But it looks as if they could use four members, not three.

In Pond Inlet, there are four members in this community of 1,300 to deal with about the same level of activity as in Gjoa Haven, which has a smaller population of 1,100.

What keeps police in Gjoa Haven hopping is alcohol.

Much of the crime in this dry community is alcohol-related. When police are busy, it’s because there is alcohol around, Marshall said— and “everyone suffers.”

Gjoa Haven has been an alcohol-free community since 1982. Being a “dry” community means that if you have alcohol in your possession in Gjoa Haven or even on your breath you risk going to jail and will receibe a small fine of about $50.

During the last liquor plebiscite, 72.5 per cent of the voters favoured keeping the by-law that makes the possession or consumption of alcohol illegal, within the municipal boundaries.

None this appears to be stopping alcohol from coming into the community.

“The blame or the responsibility [for this] can’t be on the RCMP’s or the hamlet’s shoulders. It can’t be. It takes a community to stand up and say we’re not going to be putting up with it and let’s see what can be done about it,” Marshall said.

Alcohol, usually vodka, flows into town, by air from Yellowknife, he said.

Some booze is brought in for personal use or to be to sold by bootleggers.

Drugs also come in the same way. Sometimes drugs or alcohol are sent through the mail, too.

The RCMP members conduct regular spot checks of baggage coming into the airport — and often receive anonymous tips leading to seizures — but even though Marshall says “large quantities” have been seized — a lot of alcohol gets into the community.

This is when police deal with a flood of assaults and other forms of violence.

A third member is essential during these times, Marshall said.

In December 2007, the RCMP announced a new backup policy that requires a minimum of two officers to attend calls involving violence, anticipated violence, domestic disputes, weapons, suspected weapons, subjects who pose a threat to self and others, or travel to areas where communications are known to be deficient.

Two members generally respond to calls in Gjoa Haven, but it’s always good to have back-up “in case we need to call that third member out,” Marshall said.

A third member also allows the detachment to do more prevention in the schools, to encourage youth to make better choices, he said.

But the cash-strapped GN will face higher costs to supply a beefed-up police presence in the territory.

The last big increase in the number of members dates back to 2001, when Paul Okalik, then the minister of justice, announced the approval of $3.53 million to increase the number of RCMP officers policing Nunavut communities by 14 members.