Lawyers argue over whose time was most wasted 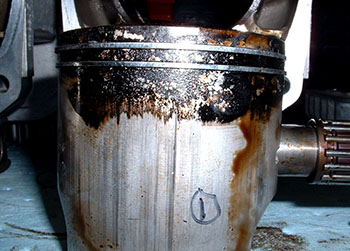 Experts from the Alberta Research Council found that GN gasoline, supplied by Refinery Associates of Texas Inc. and shipped by the Northern Transporation Co. Ltd., inflicted this kind of damage on Nunavut snowmobile engines all over the territory. (FILE PHOTO)

A $7.5 million lawsuit, launched by the Government of Nunavut six years ago to recover losses suffered as a result of the bad gas fiasco of 2000, 2001 and 2002, still lumbers through the Nunavut Court of Justice with no resolution in sight.

In a lengthy judgment issued March 30, Justice Earl Johnson waded through a long list of questions that witnesses on each side of the issue refused to answer, then decided whether to order the witnesses to answer them.

After that, he ruled on how much court time was wasted by whom and how much each side should pay in court costs for their respective refusals to answer questions.

• $4.5 million for the cost of a program that compensated hunters for damaged snowmobiles; and

• $3 million for a supply of bad gasoline that the GN dumped back onto the market at a reduced price.

Until 2002, NTCL held a GN contract to supply and ship petroleum products to Nunavut communities.

After much lawyering, Refinery Associates was eventually added to the lawsuit as a defendant.

In the fall of 2009, lawyers and witnesses from all sides showed up before the Nunavut court for the latest discovery hearing in the case, at which various witnesses refused to answer some of the questions put to them by lawyers.

Hearings of discovery are pre-trial processes held in civil court cases to decide which facts should be put before a jury in a trial, and which facts can be agreed upon by lawyers.

One controversial question was this one, put to Joe Desormeaux, the president of Arctic Refineries: “Are you surprised that this gasoline ended up in snowmobiles in Nunavut?”

Another disputed question was put to Susan Makpah, the director of the GN’s petroleum products division:

“Who did the GN and/or or PPD rely on internally for expertise on fuels, fuel compositions and fuel specifications?”

In all, Johnson ruled on 113 questions that various witnesses refused to answer at the discovery hearings.

He also dealt with complaints from the defendants that two GN representatives, Makpah, and Dave Ramsden, a former deputy minister, had not adequately prepared for the hearings.

And, after adding and subtracting the costs of court time wasted by the respective refusals to answer questions, the GN came out the loser, to the tune of $2,500.

The bad case fiasco emerged between December 2001 and April 2002, when hunters, and other owners of two-stroke snowmobiles and outboard motors complained the GN’s gasoline was damaging their engines.

Experts from the Alberta Research Council analyzed the gasoline and found that it was missing an essential deposit-control additive.

The GN then created an expensive program to compensate snowmobile owners for the damage done to their machines, covering up to 75 per cent of repair costs.

It’s not clear when, or if, the GN lawsuit will be settled.