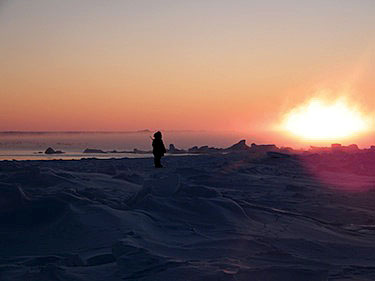 The second edition of a Nunavik photography contest is calling on residents of Kuujjuaraapik and Whapmagoostui to snap their favourite local scenery.

Fabienne Joliet, an associate professor at the National Institute of Horticulture and Landscape in Angers, France launched the contest last year in Umiujaq.

After visiting Nunavik for the first time, Joliet wanted to see the region through the eyes of local people.

Tourist guides in Nunavik rarely include photos taken by Inuit, she points out.

“[The contest] is a way to show their attachment to the land,” Joliet said.

“What I saw in their photos taken last year was a strong attachment to ephemeral elements, like the sunset, different states of water such as ice, snow or waterfalls,” she added. “I also found that their favourite landscape or scenery is not usually very far from the village.”

See three of last year’s winning images from the region around Umiujaq here.

This year, anyone who has lived in Kuujjuaraapik or Whapmagoostui for at least a year can submit one photo anytime before August 12, 2011.

The photo can be recent or several years old, Joliet said, as long as it’s taken within the region.

The landscape area is limited in the north by the Nastapoka River, in the east by Clearwater Lake, to the south by the Little Whale River and to the west by Umiujaq Islands.

The contest is sponsored by the French polar institute (IPEV), as part of a research bursary to study aboriginal perceptions of landscapes.

Winning images are destined for a photo album that Joliet hopes to reproduce for the community, including text explaining each image.

The album could be used as a tool for tourism or for local classrooms, she said. Winning photos could also find their way into a planned interpretation centre for Tursujuq Park.

Photographers can send their photos to Joliet by email at or in person between August 4 and 12, when Joliet will be visiting Kuujjuaraapik.