“Competition is healthy, and it keeps prices down” 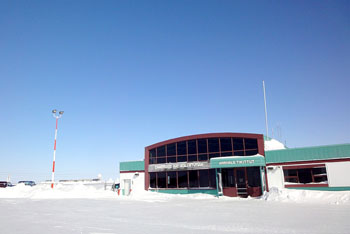 Cambridge Bay’s new airport could get a lot busier in the future when there will be two helicopter companies operating out of the community. (PHOTO BY JANE GEORGE)

How crazy do you have to be to start up an independent business in Nunavut during an economic recession?

A slow economy can be a good time to start a business, she said, because it lets you make sure you’re on the right path.

But first you need to make sure you have business skills, know your market and be patient, Gillis said in a recent interview.

“As long as you have that to draw on or understand it yourself, by all means it’s a great opportunity to run your own business,” she said.

Many people are encouraged to start their own businesses without knowing what’s involved and that they can’t expect to show a profit for the first year or two, she said.

Gillis and her husband, Carson, are prepared to wait.

Registered with Nunavut Tunngavik Inc. as an Inuit-owned company, Trinity-Qillaq wants to supply helicopter services to the mining, government and environmental management industries in Nunavut.

When mining exploration starts moving again, and particularly if Cambridge Bay becomes the site of Canada’s future high Arctic research station, Trinity-Qillaq will be in a good position to bid for contracts.

But when it comes to bidding for contracts, they’ll also compete head-on with Kitikmeot Helicopters, a joint venture with Great Slave Helicopters, whose president is Ikalututiak co-op manager Bill Lyall.

Kitikmeot Helicopters recently picked up a two-year mining contract with Newmont Mining for this year’s five-month exploration program out of its Doris Camp as well as next year’s yet-to-be-determined program.

The gross revenue for the first year of this contract is expected to be about $4 million, according to a May 13 news release from Discovery Air, Great Slave Helicopter’s parent company.

Missing out on this plum contract doesn’t worry Trinity-Qillaq.

“This gives us the time to really get establish and really solid because you have to go after these contracts. You don’t want to jump too soon,” Gillis said.

Neither does facing off against a company that touts its 12 years of business in the Kitikmeot faze Trinity-Qillaq.

“There’s that whole thing up north that we don’t want competition, but competition is healthy, and it keeps prices down because everyone has to make sure their pencils are sharpened,” Gillis said.

Qillaq Innovations, which recently finished a five-plex in Cambridge Bay for the Nunavut Housing Corp., also hopes to link up its sales of transportable, collapsible modular structures and emergency shelters to the new helicopter venture.

“When people are looking for a camp, we’ll be ready for them, with camp structures, emergency shelter and emergency medical structures,” Gillis said. “I think the economy is turning around. We’re just making sure that we have all our ducks in a row.”

Rob Carroll, president and co-founder of Trinity Helicopters, said he wants the helicopter business to offer training possibilities for beneficiaries.

“We can supply that kind of mentorship and training,” Carroll said.

Trinity-Qillaq plans to base one of Trinity Helicopter’s fleet of seven Bell helicopters in Cambridge Bay but “before we do that, we need work,” he said.

For now, Trinity-Qillaq is looking to 2011 and beyond when mining companies start to gear up their exploration activities again.

“I’m not looking at this as a short-term arrangement. It’s going to take a while before we can find beneficiaries to give training to, before we get into the system. So, it’s a process,” Carroll said.