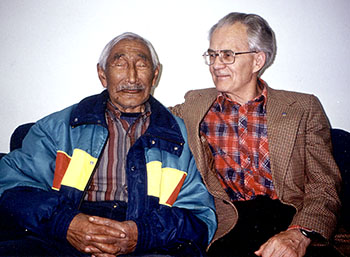 Two old friends: Etuangat and Otto Schaefer when they saw each other for the last time in Pangnirtung, May, 1993. (PHOTO BY JANE GEORGE)

One of the great pioneers of Arctic medicine, Dr. Otto Schaefer, well-known to many Nunavut residents, died peacefully at his home in Jasper, Alta. on Nov. 2 at the age of 90.

Nearly 15 years ago in Pangnirtung I witnessed a magical scene, when two old men, Schaefer and Etuangat, met for the last time.

Not knowing much about the history which bound these two so closely together, I tried to capture their shared pleasure that afternoon with my camera.

You can find one of the photos I took that day printed in a book written by Dr. Gerald W. Hankins and published by the Arctic Institute of North America.

Called Sunrise over Pangnirtung, it tells the story of “the dawn of a new day for the health care of the North.”

Schaefer, who grew up and received his medical education in Germany, emigrated to Canada in 1951.

After heading to Aklavik, and then, to Pangnirtung, the diminuitive doctor fought epidemics of tuberculosis, German measles and meningitis with every medical tool available to him.

Schaefer also wanted to understand and conquer what he called the increasing number of “diseases of civilization” that affected Inuit — tooth decay, fetal alcohol syndrome, diabetes, and anemia.

Schaefer maintained a 50-year relationship with the North, with Inuit— and, particularly, with Etuangat of Pangnirtung.

Etuangat, a community leader and one of the last Pangnirtung residents with direct knowledge of the whaling era, died at age 96 in 1996.

During one epidemic, Etuangat worked for three days without sleep, helping to give innoculations and transporting sick people to the hospital.

“When you see so many sick people, you want to help in whatever way you can,” Etuangat said.

Both devoted to relieving misery, Etuangat and Schaefer formed a lasting bond, and worked closely together in 1956 and 1957, when the doctor and his young family lived full-time in Pangnirtung.

When the two men travelled to the 14 camps in the area twice a year by dog team journeys of up to 2,000 km, they became fast friends.

Etuangat helped the doctor and his wife Didi learn Inuktitut, and taught them Inuit ways. When Schaefer’s daughter was born in Pangnirtung, she was called Taoya, after Etuangat’s daughter.

Schaefer recalled a Christmas that the two families spent together as “the happiest of all.”

After leaving Pangnirtung, Schaefer returned with his wife several times to visit.

When I ran into Schaefer and Etuangat that May, the doctor said he was in Pang “for the last time.”

The two old friends spent afternoons visiting, or playing cards and talking about old times at the Angmarlik Elders’ Centre.

That’s where Schaefer asked Margaret Karpik, then the centre manager, for some help in understanding exactly what the “-kuluk” meant when it was attached to the word “luttaaq” or doctor.

Schaefer was puzzled because everyone was calling him “luttaakuluk.” He seemed surprised, but touched, to learn his atinguaq or nickname meant “dear little doctor.”

At Schaefer’s request, his body was donated for medical education.

A memorial to celebrate Otto’s life will take place in Jasper, Alberta on Nov. 22.