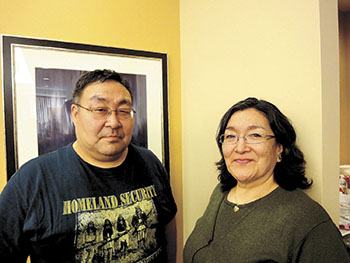 Timothy Sangoya and Lizzie Ningiuruvik, who work for Nunavik’s Nunalituqait Ikajuqatigiitut wellness group, told KRG delegates meeting in Kuujjuaq this week that it’s time to take action to curb drug and alcohol use in Nunavik. (PHOTO BY JANE GEORGE)

KUUJJUAQ — Nunavimmiut must protect and care for their children and “start acting like adults,” two wellness counsellors said at the Kativik Regional Government council meeting this week in Kuujjuaq.

“We need to act like adults and not do whatever we want,” Lizzie Ningiuruvik told the group of regional leaders on Feb. 22. “We can’t turn a blind eye. We need to enforce a healthier lifestyle.”

Ningiurvik and Timothy Sangoya, who work for Nunavik’s Nunalituqait Ikajuqatigiitut wellness group, said Nunavimmiut can curb their drug and alcohol use.

To do this, they need to talk to each other more, learn more about the dangers of substance abuse and then take action.

If they don’t, Nunavik’s future will be at risk: “these alcohol and drugs are killing the Inuit way of life,” Sangoya said.

If inuutuinnait adults don’t change their ways, Ningiuruvik questioned who will be left to raise Nunavik’s 4,885 children under 20 or run the future Nunavik Regional Government.

“If we are going to have a good government, we have to have people who are not affected by alcohol and drugs,” she said.

Many Nunavik children receive little parental guidance. Some are scared to go home, while others end up living in foster care or with their grandparents.

But, at the same, Nunavik elders don’t even dare tell the younger generations about what’s right or wrong.

“Today they’re not respected no one listens to them,” Sangoya said.

Children in Nunavik are also starting to use substances at a younger age, the two counsellors said.

“Use by adults has become so normalized that we have forgotten to say it’s dangerous,” they said in a two-hour presentation also broadcast live to Nunavimmiut on the region’s Inuttitut-language radio network, Taqramiut Nipingat Inc.

Unfortunately listeners couldn’t see the gruesome serious of slides which Ningiuruvik and Sangoya served up to underline the visible damages from drugs.

They also cited various research studies and statistics about the damage drugs and alcohol can cause.

Nunavik infants are being damaged by their mother’s use of alcohol during pregnancy. These children who end up with fetal alcohol syndrome become prone to drinking and using drugs and developing mental illnesses, they said.

Ningiuruvik and Sangoya also pointed to the rising rates of criminal activity in Nunavik, which includes increases in the numbers of assaults, drug offenses and gun calls.

Nearly all these offenses are linked to drugs and alcohol, they said.

During a 14 community field trip last spring, they learned how inmates in southern jails regularly exchange country food for drugs and heard how the traditional greeting at airports has degenerated into questions about “did you bring [drugs and alcohol] ” or “do you know someone who has [drugs and alcohol].”

They also heard Nunavimmiut want sober leaders who are less “complacent about drugs and alcohol.”

Even as they spoke to the regional council, Ningiuruvik and Sangoya made a point to say they were not attacking leaders around the council table who may be users.

Yet they were clearly asking for some action.

A “just say no” to get youth off drugs and alcohol flopped, they said, while the messages from elders to stop isn’t producing results, despite more than 30 years of warnings.

During the field trip people came up with many common-sense suggestions about how individuals can tell users to stop and “tell myself to stop.”

The team, which also includes Siasi Irqumia, Elashuk Pauyungie, Iola Metuq and Caroline Alexander, plans to travel again around Nunavik and speak at a conference with Nunavik’s youth association later this year.