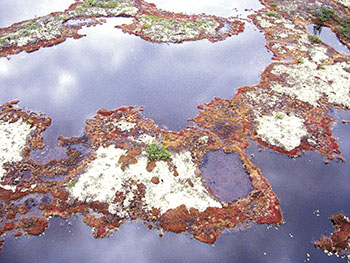 KANGIQSUJUAQ — The southernmost permafrost limit has retreated 130 kilometres over the past 50 years ago in Quebec’s James Bay region, say researchers from Laval University.

If that trend continues, permafrost in that region will completely disappear in the near future, said biologist Serge Payette, while the permafrost’s southern limit moves father into Nunavik’s territory.

The researchers measured the retreat of the permafrost border by “palsas,” mounds which form naturally over ice contained in the soil of northern peat bogs. They are similar to, but generally smaller than pingos.

Conditions in these mounds contribute to the growth of native vegetation such as lichen, shrubs and black spruce.

Payette said that aerial observations show that palsas are in an advanced state of deterioration across much of the James Bay region.

In an initial 2004 survey, the researchers looked at seven bogs between the 51st and 53rd parallels. At that time, only two of the bogs contained palsas, Payette said. They compared that to aerial photos taken in 1957, which showed palsas present in all seven bogs.

A second survey in 2005 revealed that the number of palsas present in these two bogs had decreased over the year by about 90 per cent.

“This is already significant in the (Nunavik) region,” Payette said, adding that melting permafrost has already played a role in de-stabilizing the ground surface. “In the medium-term, this will have an impact on local infrastructure.”

Climate change is the most likely explanation for the receding palsas, Payette said, noting the average annual temperature of the northern sites he has studied for over 20 years has increased by 2 degrees Celsius.

“If this trend keeps up, what is left of the palsas in the James Bay bogs will disappear altogether in the near future,” he said, “and it is likely that the permafrost will suffer the same fate.”