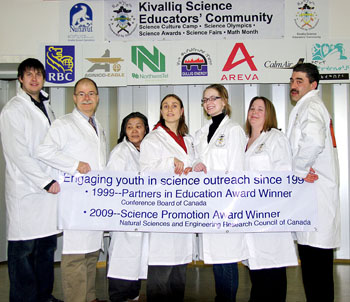 Science teachers in the Kivalliq are getting national recognition for a job well done.

The Natural Sciences and Engineering Research Council of Canada has awarded its annual NSERC Award for Science Promotion to a group of teachers in the Kivalliq region, a prize that includes a fat cheque.

“These activities made science fun and relevant preparing Inuit youth for an increasingly technological world. It is also noteworthy that your organization emphasizes the connection between science and the student’s culture and heritage.”

The Kivalliq Science Educators’ Community has not yet firmly decided what to do with the $25,000 award from NSERC.

“That (the money) was quite a nice bit of news,” he said. “It was quite nice to hear and made us feel very good about what we are doing.”

KSEC is a registered charity which has operated for 16 years, made up mostly of educators in the Kivalliq region who are involved with science and math teaching.