First inmates expected at Iqaluit facility by end of June 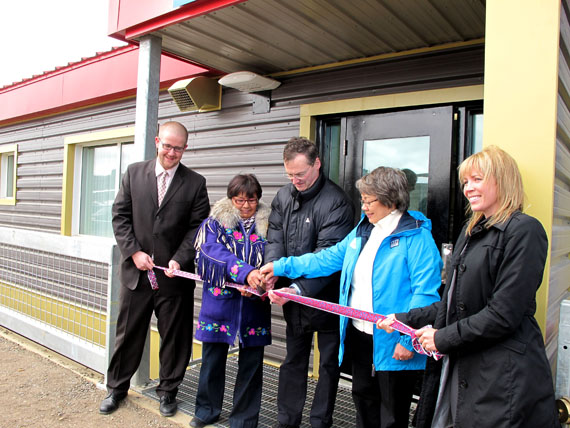 The Nunavut Women’s Correctional Centre officially opened in Iqaluit on June 11, and should be accepting its first inmates within the next few weeks.

At a ribbon-cutting ceremony, justice minister Keith Peterson called the facility “long overdue,” because female inmates in Nunavut are housed right now at the cramped and overcrowded Baffin Correctional Centre with only an hour a day outside their cells.

Confined to a single room at BCC and unable to mingle with the male population, female prisoners there have no access to rehabilitative programs.

The new prison’s manager, Melanie Blanchette, explained that there are plans for programs on substance abuse, domestic violence and anger management, as well as traditional skills such as sewing and cooking.

“It’s been a long time coming,” said Trista Mercer, a member of the Qulliit Status of Women Council.

Mercer said she hopes the female-oriented programs would help women move on with their lives once they return to their communities after serving time.

The establishment of NWCC in Iqaluit also means Nunavut no longer has to house female inmates outside the territory.

Nova Scotia charges Nunavut $100 a day per prisoner it takes care of, and the NWT charges $269 a day, Strader said.

Representing the Nunavut Court of Justice at the ribbon-cutting, Justice Sue Cooper said the prison would “give the bench a greater degree of comfort that when a female is on remand or on sentence that they are going to be closer to home.”

The 2,600-square-foot, $3.5 million building is open-concept, with a wide common area adjoining the four, two-woman dorm rooms. There’s a kitchen, seats and a 42-inch television in the common area.

The building is laid out so that the front desk has a view of the common area to the left and the intake section to the right.

The intake area contains two specialized cells that are little more than empty rooms with toilets: one is for new prisoners being processed, and the other the isolation cell to serve as a “cooling-off” room for inmates whose behaviour threatens others or themselves.

Processing new prisoners includes a medical examination from a staff nurse who is shared with the youth facility next door.

There will always be two floor staff on shift, both female, and Blanchette will also be there every week day from nine to five.

Blanchette said, that unlike the BCC, the eight-person capacity of NWCC isn’t flexible. The open-concept design makes it impossible to provide security for any additional bunks.

“We are not built to go over capacity,” she told reporters.

Blanchette said Nunavut has never had more than five or six female inmates at any given time, and if there are too many for NWCC there’s still the option of sending them out of territory.

Peterson gave credit to former the former justice minister, Paul Okalik, who had been involved in pushing plans for a women’s prison through the last legislature.