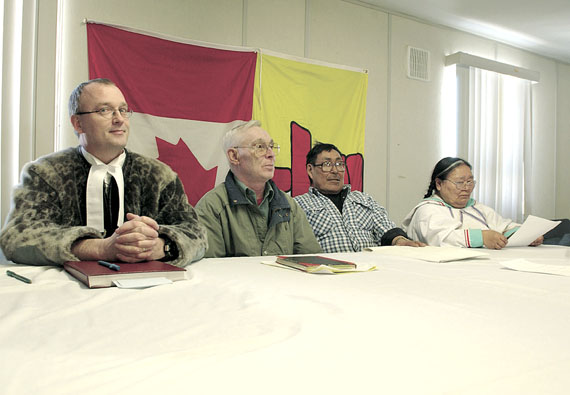 Kilpatrick’s letter, entitled “Submission to the minister of justice on additional judicial appointments” is a plea to Nicholson to appoint more judges to the Nunavut Court of Justice.

Nunavut has four permanent judges, compared with five in Yukon and nine in the Northwest Territories.

Yukon’s population is roughly the same as Nunavut’s and the NWT slightly larger, but Nunavut’s violent crime rate is easily the highest in Canada.

“For the last decade, the Nunavut Territory has experienced an unrelenting and accelerating rate of serious violent crime,” Kilpatrick wrote.

Kilpatrick pointed out that in 2009, four citizens were charged with murder, two with manslaughter, 16 with attempted murder and 40 with aggravated assault.

“There are now more homicides pending in the Nunavut Court of Justice than in the other two territories combined,” he wrote. “These trials will consume a significant amount of the court’s limited resources due to their size and complexity.”

In 2009, there were 285 charges of common sexual assault laid in Nunavut, about 10 times the national per capita average once Nunavut’s small population size is factored in.

Before 2009, the last time Nunavut got a new judicial position was in 2002, when the territory got a third permanent judge for the first time, Justice Earl Johnson.

Since the territory’s creation, the number of charges laid against Nunavut residents has increased every year, even faster than the increase in population.

Kilpatrick argued that judges in Nunavut are overworked and that the court doesn’t have the resources to operate for enough weeks of the year to process all the serious cases that come through it.

Nunavut needs not one but two more judges just to keep up, he maintained.

There is a limit to what can or should be expected from the resident judiciary. This limit has now been reached,” he wrote.

“Nunavut’s judiciary is moved to seek additional assistance by a sense of urgency, and a perception of impending crisis. With a complement of only four judges, this court is not equipped to address the demand now being made upon its services.”

The appointment of Justice Neil Sharkey in December 2008 brought Nunavut’s bench up to four judges for the first time.

But in October 2009, Nunavut’s first Chief Justice, Beverly Browne, stepped down and wasn’t replaced until December by Sue Cooper.

Then, the long-serving Justice Earl Johnson fell ill in January 2010 and didn’t return to work until May.

So for almost half of the time since Sharkey’s appointment, the four-judge bench has only had three judges serving.

The Nunavut Court of Justice has been forced to rely on short-term visits from deputy judges to keep up. Deputy judges, who normally serve in other jurisdictions, use their vacation time or judgment-writing weeks to come to Nunavut.

“While technically competent, the deputy judge typically lacks familiarity with the community and the people he or she is there to serve,” Kilpatrick wrote.

“The constant change in approach associated with the deputy judge’s ‘outside’ legal experience and outlook does not enhance public confidence or understanding of the administration of justice in Nunavut.”

Deputy judges can’t be employed for longer trials because they won’t be in town long enough, so that heavy workload falls on the permanent resident judges.

Also, Kilpatrick pointed out that judges spend a lot of time on circuit travel to Nunavut’s many remote communities, which eats up a great deal of their time.

Providing court services to the Kitikmeot region poses a particular challenge, because court circuits there take two days just to travel from Iqaluit to Yellowknife to the communities.

But the busiest courthouse in Nunavut is in Iqaluit, partially because of the city’s population but also because remanded prisoners in Baffin Correctional Centre who plead guilty often appear in court in Iqaluit for sentencing rather than fly back and to their home communities.

In 2010, the court will have sat 41 weeks in Iqaluit and can’t do any more because of insufficient resources.

“Every component of the justice system in Nunavut, including the Federal Prosecution Service and the RCMP is stretched to capacity by the existing workload,” he declared.

He said the territory’s federal prosecution service is chronically understaffed and constantly trying to fill vacancies.

Of fifteen Crown prosecutor jobs in Nunavut, only nine are staffed. Three of those nine are now on leave, so Nunavut’s Crown office flies in Crown lawyers from Ontario and other jurisdictions.

McLaren said if there were more permanent judges in Nunavut, that would allow for more weeks of court and more circuits to the communities, which would place a further strain on the already-overworked Crown prosecutors.

When asked if the workload was a factor in the chronically high turnover rate among Nunavut Crowns, McLaren admitted, “Workload has been a factor.”

“Our resources are always tasked to the max when factoring in day to day calls for service, providing assistance to the courthouse (for additional security) and escorting prisoners and doing relief throughout the North on short notice,” he wrote in a statement to Nunatsiaq News.

“Our ability here in Iqaluit along with other busy communities such as Pangnirtung, Arviat, Gjoa Haven is also very limited in terms of pro-active policing activities.”

A statement from the federal justice minister’s office said he received Kilpatrick’s letter and would draft a letter of response.