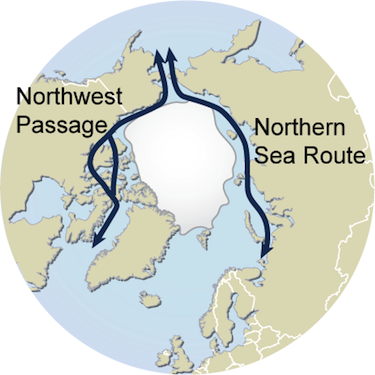 Shipping on Russia’s northern sea route can cut time and money off of transportation costs between Europe and China. (IMAGE BY HUGO AHLENIUS/ UNEP/GRID-ARENDAL)

Russia may establish a new bureau to oversee growing shipping traffic through its Arctic Northern Sea Route, report the Barents Observer and Voice of Russia.

The Northern Sea Route administration would provide navigational and hydrographic information to ships travelling through the Arctic Ocean over the top of Russia, in a route sometimes also called the Northeast Passage.

Traffic is already growing on this route, which cuts one-third of the travel time off a trip between European and Asian ports through the Suez Canal.

At least six convoys with oil tankers are expected to travel the route next year, and Russia icebreaker agency already has 15 requests for assistance for next year, according to the Barents Observer.

As well, Russian politicians met recently with indigenous groups and oil and shipping companies to discuss proposals for a new law governing the Northern Sea Route.

More than $150 billion in industrial development is to take place in the Barents region—northwestern Russian and northern Scandinavia—over the next decade as new mining and oil and gas projects move into operation.

And to handle the new development, Russia, Finland, Sweden and Norway are all expanding railway, port and electric infrastructure in the region.