“The corporation can be proud to exhibit its balance sheet” 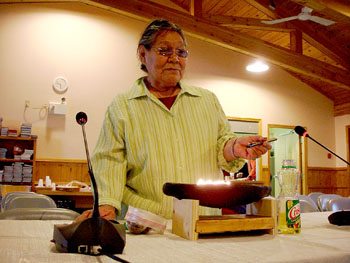 Alacie Joamie of iqaluit lights a qulliq to open the Oct. 19 annual general meeting of the Qikiqtani Inuit Association. (PHOTO BY JANE GEORGE) 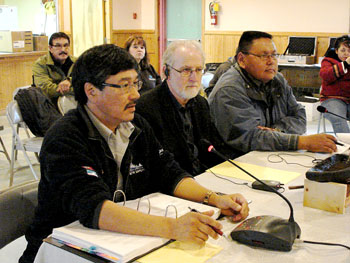 George Qulaut, chairman of Qikiqtaaluk Corp.’s board, John Baker, QC’s director of finance, and Peter Keenainak, the former president of QC, deliver good financial news to the annual general meeting of the Qikiqtani Inuit Association on Oct. 19 in Iqaluit. (PHOTO BY JANE GEORGE)

Thanks to Baffinland Iron Mines’ Mary River iron mine project, the Qikiqtaaluk Corp. and the Qikiqtani Inuit Association managed to show good financial results for the financial year ending March 31, 2009.

Their prospects look so good that QC’s chairman, George Qulaut, said QC is seriously looking at the possibility of building a hotel in Iqaluit, an idea that was enthusiastically received at the QIA annual general meeting on Oct. 19 in Iqaluit.

The health of QC has improved every year for the past nine years, “so that today the corporation can be proud to exhibit its balance sheet,” says QC’s financial report.

Yet the QC ‘s good fortunes last year would not have been possible without $11 million received from work that Qikiqtaaluk Logistics, a QC subsidiary, completed at Mary River for the Baffinland iron mine project.

That’s even with the 10 per cent discount Qikiqtaaluk Logistics granted Baffinland to help them out.

The results were still “pleasantly surprising and hardly what was expected with the downturn in the economy,” John Baker, QC’s director of finance, told QIA delegates.

Some results from the eight companies in which QC holds a controlling interest were encouraging.

For instance, Baffin Gas in Iqaluit expanded and increased its sales by $1 million, while the Qikiqtaaluk Fisheries Corp.’s yearly profit increased “considerably.”

“This is an indication that there is still money to be made in the fishery when it is properly managed,” QC’s financial report says.

“NEAS cargo levels did not reach the levels of the sales they had produced in previous years due to the scaling down of the activity in the Qikiqtani region,” says the financial report tabled at the QIA meeting.

As for the QIA, its secretary treasurer Joe Attagutaluk said 2008-09 was a “successful year financially” for the organization that represents Inuit in the Baffin region.

QIA’s has upped its cash reserves from $4.9 million to $8 million, which is generally a sign of financial health.

And its operating deficit of $488,970 was much less than the $2 million predicted, while the economic development fund produced a surplus of $3 million.

But much of this surplus came from $1.9 million in land lease payments from Baffinland and a MOU, signed at the Nunavut Mining Symposium last March.

QIA’s subsidy from Nunavut Tunngavik Inc. is set to rise next year by three per cent to $5,086,476, but to help NTI balance its budget the community liaison budget will remain the same at $1,390,461.